Shipped Halfway Around the Globe for Leather Production

More than 1.4 billion cows, sheep, and goats and millions of other animals are killed each year for leather. In countries like Turkey, the trade in skins is booming – causing the cruel export of live animals to rise sharply. In 2018, 900,000 live cattle and nearly 281,000 live sheep were imported into Turkey from countries like Australia, Austria, Brazil, France, Germany, Ireland, and Spain.

These animals are exported for slaughter to countries such as Turkey in order to meet the demand for fresh halal meat on site and the global demand for leather. After slaughter, their skins are shipped all over the world, including to the US.

Investigators were able to document some of the tortuous routes animals endured. Brazilian cows are transported for weeks on ships bound for Turkey. There, some animals continue on to Iraq in lorries. Another route leads to Turkey via France and Bulgaria. And German and Austrian cows were able to be traced all the way to Lebanon. 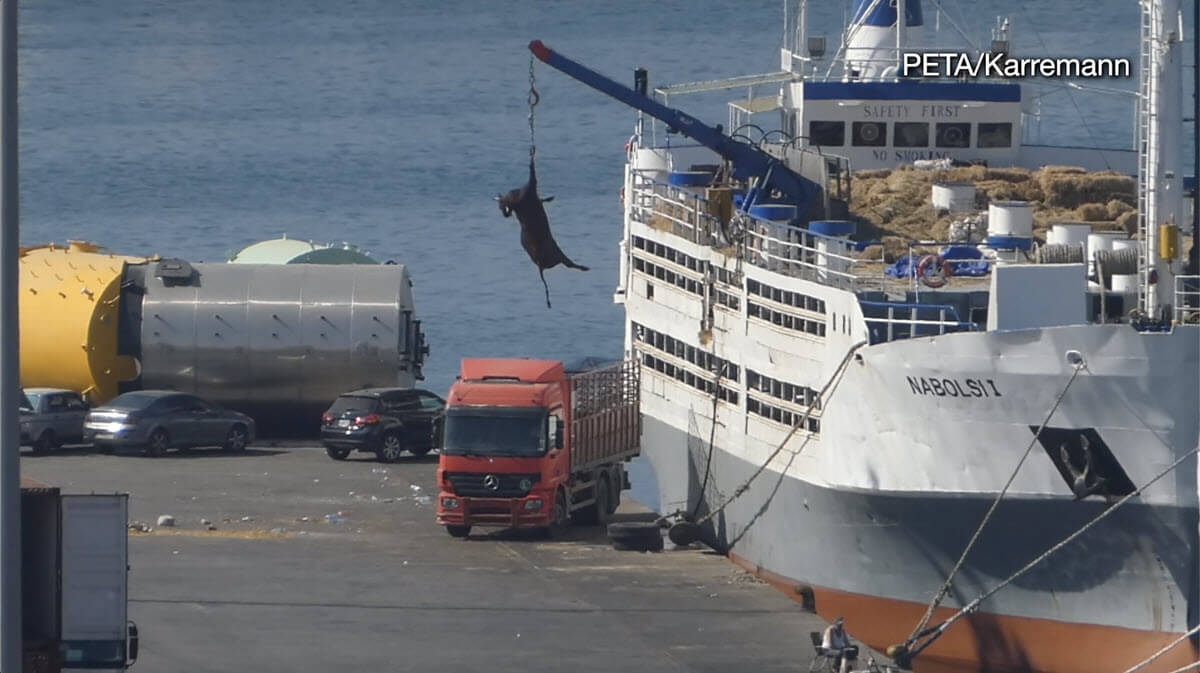 Typically, during the arduous, often weeks-long voyages, the animals receive insufficient food and water. They’re exposed to heat and cold with no protection and stand huddled tightly together amid their own excrement. During transport, they jostle each other, causing injuries. If they fall down, they can be trampled to death. 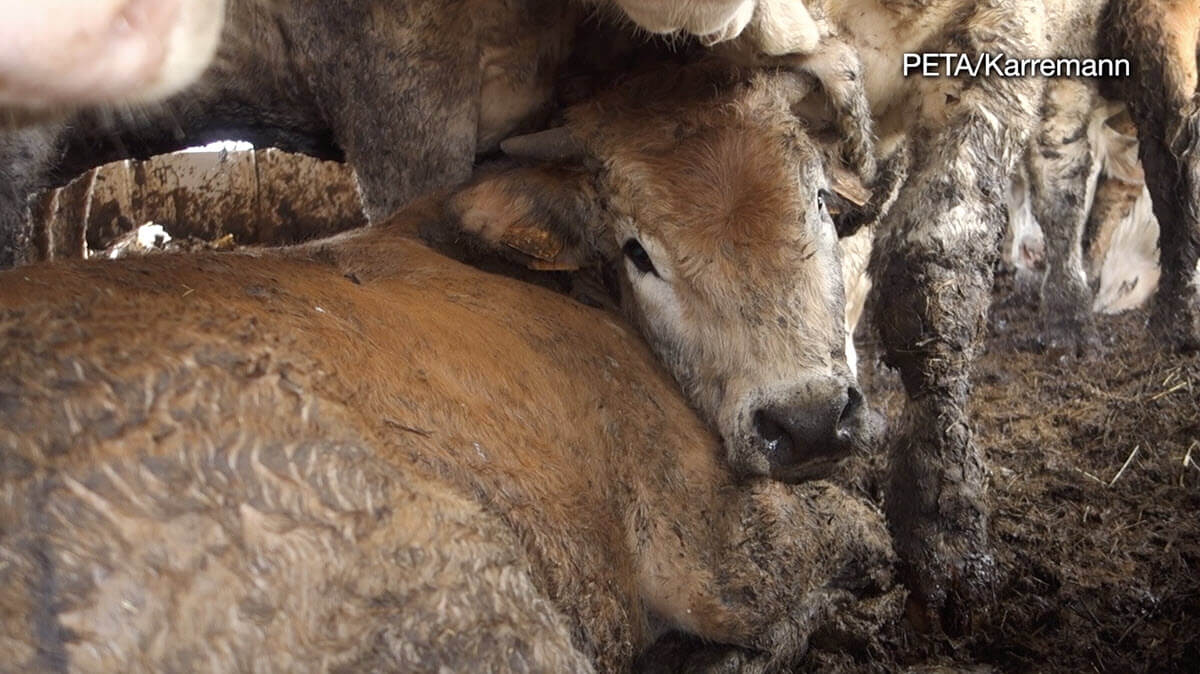 Animals in the international leather industry are commonly kept, transported, and killed in filthy, crowded conditions in which devastating zoonotic diseases can develop and spread. It can take days to transport animals across national borders. And global security issues, such as the COVID-19 pandemic, have forced animals to endure even longer journeys and more suffering. The stress of transport – often compounded by lengthy delays – results in not only immeasurable suffering but also a heightened risk of spreading diseases – some of which can be passed on to humans. 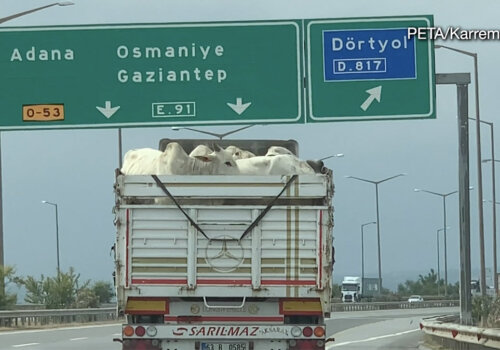 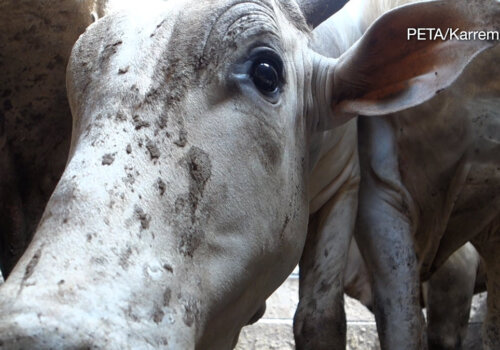 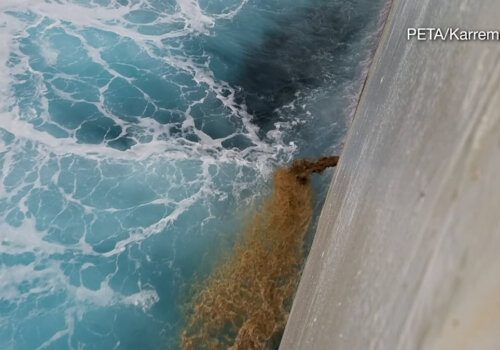 Killed Without Stunning for Leather Production

In many countries, the animals are killed without first being stunned. Cows, sheep, and goats are simply pushed to the ground, sometimes they’re tied up, and their throats are slit with a knife. Because of poorly trained workers or the use of dull knives, their deaths are agonising and can last several minutes. Recordings from Libya and Lebanon show that workers slit the throats of cows and sheep in full view of the other animals and throw them onto a pile to let them bleed out, while they writhe and kick. 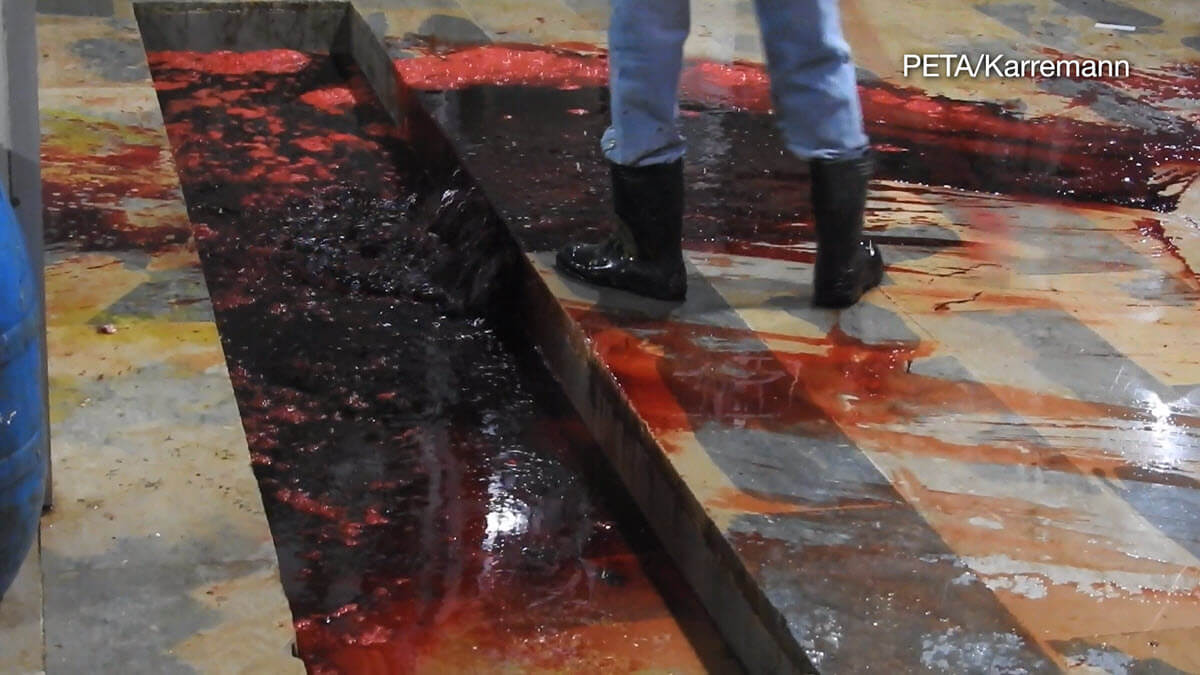 Although it is illegal in Turkey to transport injured or dying animals to the abattoir, the footage shows that workers forcibly dragged a weak, apparently dying cow out of an articulated lorry then slit his throat in the abattoir. Even pregnant animals have to endure the agony of live export. And if they injure themselves during transportation, they, too, are dragged to the abattoir and killed, along with their unborn babies. The skin of unborn calves, known as “slunk”, is regarded as particularly valuable for leather in countries like China, and it also reaches countries around the world via the global leather trade.

Cows Are Forcibly Dragged off Ships With Cranes

When, after days or weeks, the animals finally reach their destination, their fur is frequently matted with a thick coating of excrement and urine. Some are so weak or injured, that they no longer have the strength to stand up. So they’re hoisted with cranes, their entire weight hanging by one leg. Since a fully grown cow weighs over 450 kilograms, this can cause excruciatingly painful joint dislocations and broken legs. 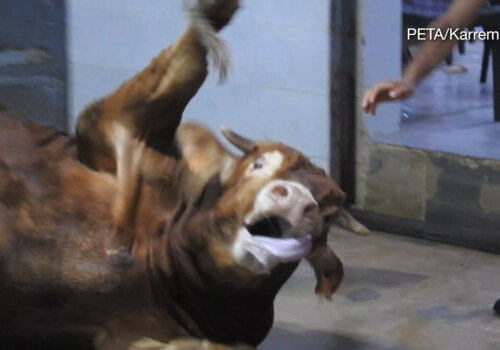 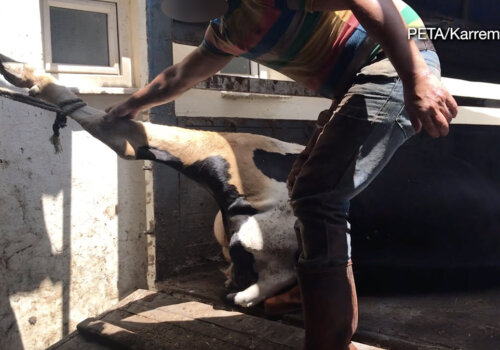 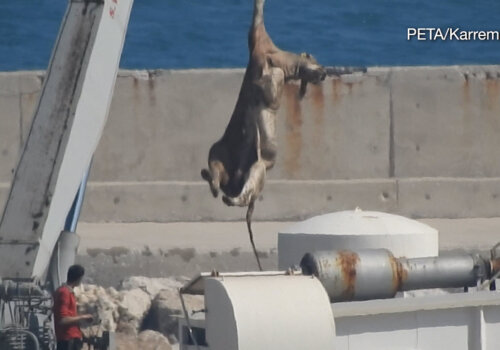 Because of inadequate labelling requirements for leather products and non-transparent trade routes, it is usually impossible to trace the origin of the animals and their skins. Consumers can’t tell whether their shoes or handbags were made from the skin of a cow, a dog, or a kangaroo or which country the animal was slaughtered in. Designations like “Made in Italy” don’t reveal any information about the origin or the processing of the skin – only where the finished product was manufactured. 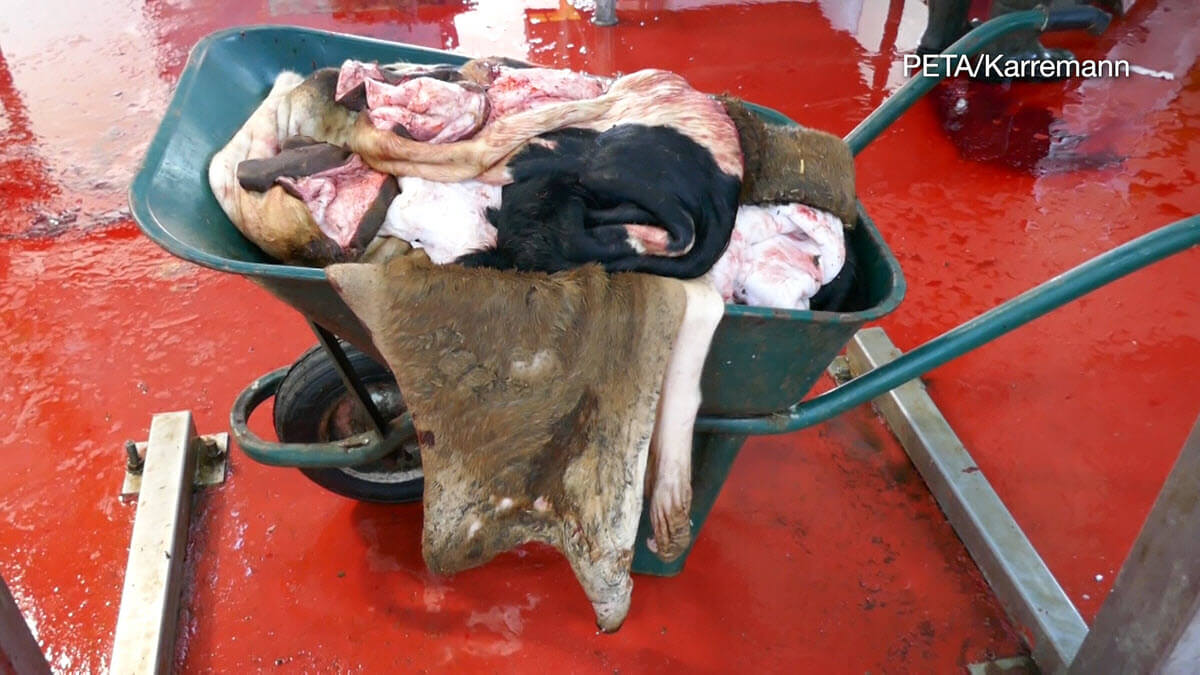 Leather Is a Catastrophe for Humans and Nature

Leather not only causes animals to suffer, it is also one of the most environmentally damaging products in the world. Each day, irreplaceable rainforests are cleared to raise cows and grow their feed. The animals’ methane emissions also contribute tremendously to climate change. In addition, numerous chemicals such as chromium and formaldehyde are used in the tanning process, which poses a danger to both the environment and humans. End products like shoes, handbags, and clothing often contain traces of chromium-6, a carcinogenic heavy metal.

Regardless of leather’s origins, it is always linked with animal suffering and environmental degradation. While we treat dogs and cats as our companions, millions of animals like cows, sheep, and goats are standing knee-deep in their own excrement, tormented with electric shocks, transported in cramped lorries halfway around the globe, and finally killed. Please, for animals’ sake, always check the label, and if it says “leather” or shows the corresponding symbol for it, leave the item on the shelf. Instead, choose sustainable synthetic leathers and vegan alternatives made from innovative materials like recycled plastic, cork, or even pineapple leaves, mushrooms, grapes, apple peels, or other fruit waste. 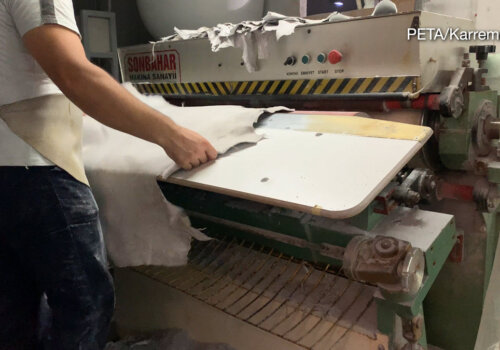 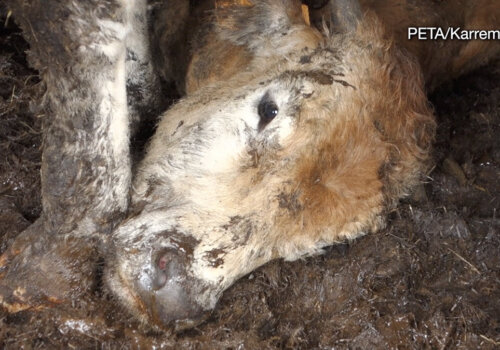 Want to Do More to Stop the Killing of Animals for Their Skin?

Levi’s is known around the world for being the original blue-jeans brand – but what many of its customers don’t realise is that cows suffer for the leather patches sewn onto the backs of its jeans. The company knows that cruelty is inherent in the leather industry, but it’s refusing to help animals.

And H&M can’t say it believes that no animal should ever suffer in the name of fashion when it still sells leather, which often comes from cows who endure confinement, extreme crowding, and disease and are denied adequate food and water.

Innovative vegan leather options that mimic the style and look of leather are readily available, and more consumers than ever are wearing vegan out of concern for animals and the environment. Please ask Levi’s and H&M to commit to selling only vegan leather.