Hideously shocking eyewitness footage from Chinese farms shows donkeys, some as young as 5 months old, being bashed on the head with a sledgehammer. Their throats are then slit, and they are left to die. These gentle animals are killed for one reason: so that their skins can be sold to leading pharmaceutical companies in China, where they are boiled down to make gelatine for ejiao, a traditional Chinese “medicine” believed to improve blood circulation.

At every farm visited by PETA Asia’s observer, donkeys were stuck in small, filthy concrete-floored pens. Located outdoors, they were only partially protected from the elements by a tin roof, and many were seen standing in their own waste and urine. The only water available to them was filthy and green with algae. One donkey was so malnourished that his ribs stuck out. Another was so sick that she couldn’t walk, so she was dumped into the bucket of a tractor and hauled away. Workers confided to the PETA Asia observer that they were concerned that environmental inspectors would fine or shut them down.

At a donkey market, the PETA Asia observer documented hundreds of doomed animals forced to wait in crowded pens in the full summer sun for their turn to be bought and sent to slaughter. Terrified donkeys were beaten with sticks, including one who was hit and screamed at when she attempted to escape through a gate that was left open.

At the end of their dreadful existence, they are killed in a most inhumane way. The footage shows farmers swinging a sledgehammer at a donkey’s forehead and then slitting the animal’s throat. Some of the donkeys continue to breathe and move after being bludgeoned. 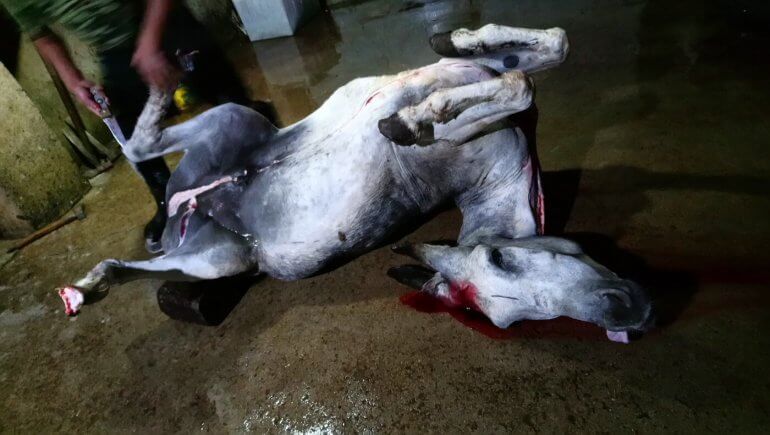 Today, the market is growing rapidly, and ejiao can be found in food and beverages, snacks like candy, and even beauty products. Donkeys are now being imported into China from other countries in Asia, the Middle East, Africa, and South America for slaughter in order to meet the demand. While Pakistan and 10 African countries have closed Chinese-funded slaughterhouses and implemented policies to ban the export of donkey skin to China, other countries, such as Australia, are shamefully considering opening up a live export trade. The industry is fuelling a black market in donkeys, and many are being stolen or slaughtered illegally so that people can profit from China’s medicinal market. The demand is so high that other animals like horses, pigs, and cows are now suffering the same gruesome fate in the production of fake ejiao.

According to Dr. Lee Yuming, a doctor of Chinese medicine: “There is a misconception about ejiao – it is not the most effective medicine to improve blood circulation in spite of its long history in traditional medicine. Nowadays, there are many other options that are much better at improving one’s health, including modern drugs and herbal medicines.”