Every year, at least 7,000 bulls are slaughtered in official bullfights in Spain’s bullrings. The animals are pushed to extreme mental and physical exhaustion before being stabbed to death. Bullfighting is never a fair fight but rather a ritualistic slaughter of a helpless animal.

Once the bull is fatigued, a man on a blindfolded horse enters the arena. He drives a lance into the bull’s back, causing the animal to bleed. The blood loss is meant to frighten and weaken the bull as more men enter on foot and proceed to plunge banderillas – sticks with a harpoon point on one end – into the bull’s upper back, causing him acute pain whenever he turns his head.

The Matador, aka the Killer

When the bull is fatigued by the blood loss and the relentless harassment, the matador (which literally means “killer”) makes his final appearance. After provoking a few charges from the exhausted bull, he aims to kill him by piercing him with his sword. If the bull doesn’t die straight away, the matador will use a dagger or another weapon to sever his spinal cord and finally kill him.

If the public praises the matador’s performance enough, he might cut off the dying bull’s ears and/or tail as a trophy – sometimes while the bull is still conscious.

Spain isn’t the only country perpetuating this kind of violence towards bulls. While the methods of torture and execution vary globally, bullfighting takes place in countries including Portugal, France, Mexico, Ecuador, Colombia, Venezuela, Peru, and parts of the United States.

The Running of the Bulls

During the annual Running of the Bulls at the San Fermín festival in Pamplona, Spain, a terrifying mob of runners (most of them tourists) chase frightened bulls about 800 metres through the streets of the city.

Two types of bulls are used in every morning run: castrated steers, who have been “tamed”, and the bulls who will ultimately be killed in the bullring.

Organisers imprison the bulls and steers in crowded enclosures and then release them onto the streets, occasionally prodding them with sticks. Panic-stricken, the bulls herd together to find safety with the steers, who have been trained to move the herd towards the bullring.

The animals often lose their footing around corners and crash into walls, sometimes breaking bones or injuring themselves in other ways.

Most tourists don’t realise that bullfighters kill six bulls on each of the days that the bull runs take place. Altogether, across the entire festival, at least 48 bulls are barbarically stabbed to death.

Since 2002, PETA has been teaming up with Spanish animal rights groups to stage eye-catching protests in Pamplona, in which hundreds of activists take a stand to draw attention to the vicious cruelty of the bull runs and subsequent bullfights.

These feisty activists aren’t alone in their distaste for tormenting bulls: in 2010, the Parliament of Catalonia made the landmark decision to ban bullfighting in that region, and many Spanish and French towns are implementing bans of their own.

In every region around the world where bullfighting takes place, the majority of the local population is against it – that’s why bullfighting is in decline everywhere. PETA estimates that in 2018, at least 7,000 bulls were stabbed to death in Spanish bullrings during official bullfights, about 56% fewer than 10 years prior. 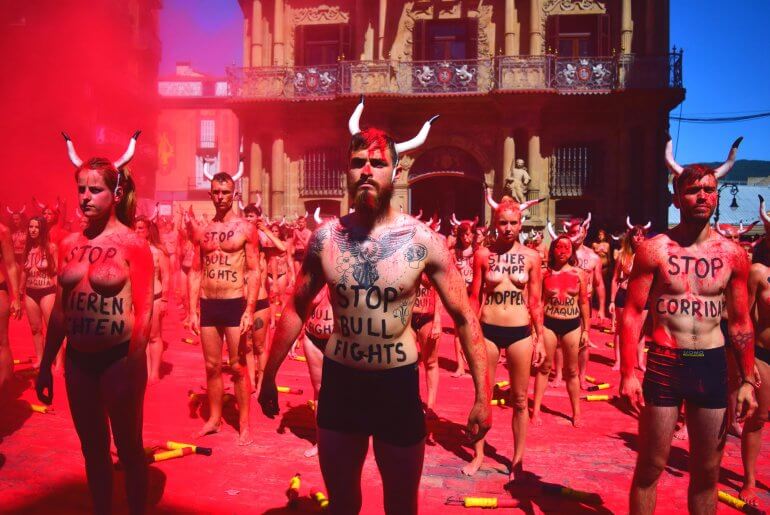 Perpetuating the Problem in Pamplona

Tourists from the UK, Australia, and other countries visit Pamplona during the San Fermín festival. Many of them are unaware that the same bulls who are chased through the streets in the morning are stabbed to death in the bullring that night.

Just by going to Pamplona during the festival, tourists are indirectly financing the torture and slaughter of bulls. Even though many visitors don’t pay to watch or participate in the bull runs, they still spend money in the city, which the local government will use to subsidise the bullfighting events.