Tigers don’t belong in captivity. They don’t choose to live in zoos, perform in circuses, or be used as selfie props. But there are now more tigers held captive than living in their natural habitats.

On International Tiger Day, we look at some of the worst ways that humans exploit and torment these animals – and how you can help end this suffering. Please read on and share:

1. Tigers Are Used for Selfies and Encounters

You may have seen people post photos on social media in which they’re posing with tigers, especially cubs – but there’s a hidden story behind every picture. Big cats forced to pose with tourists are usually chained, beaten, and even drugged to make them placid. Once they’ve grown too large to handle, many are left to languish in cages for the rest of their lives, sold to roadside zoos or into the black market trade in exotic animals, or slaughtered for their flesh, bones, and body parts to supply the meat industry or traditional medicine. Never take selfies with wild animals.

Forced to endure a lifetime of incarceration, tigers in zoos commonly engage in abnormal and self-destructive behaviour. In February, a tiger imprisoned at London Zoo was mauled and killed by another tiger, and just a few days later at Longleat safari park, a tiger died during a fight with two others. These tragedies are examples of what happens when animals are denied everything that’s natural and important to them, including the opportunity to choosing their own mate and flee from a conflict.

It’s unsurprising that frustrated animals often try to escape their confinement – sometimes with fatal consequences. For example, a tiger escaped his enclosure at Cologne Zoo in Germany and killed a keeper before being shot dead, and a tiger at a zoo in the Czech Republic escaped and mauled three zoo employees.

Even in the best zoos, under the most careful conditions, a lifetime of captivity is no life at all for a tiger. To learn about these wonderful animals, read a book, or watch a documentary – don’t pay to see them being displayed as living exhibits.

3. They’re Forced to Perform in Circuses 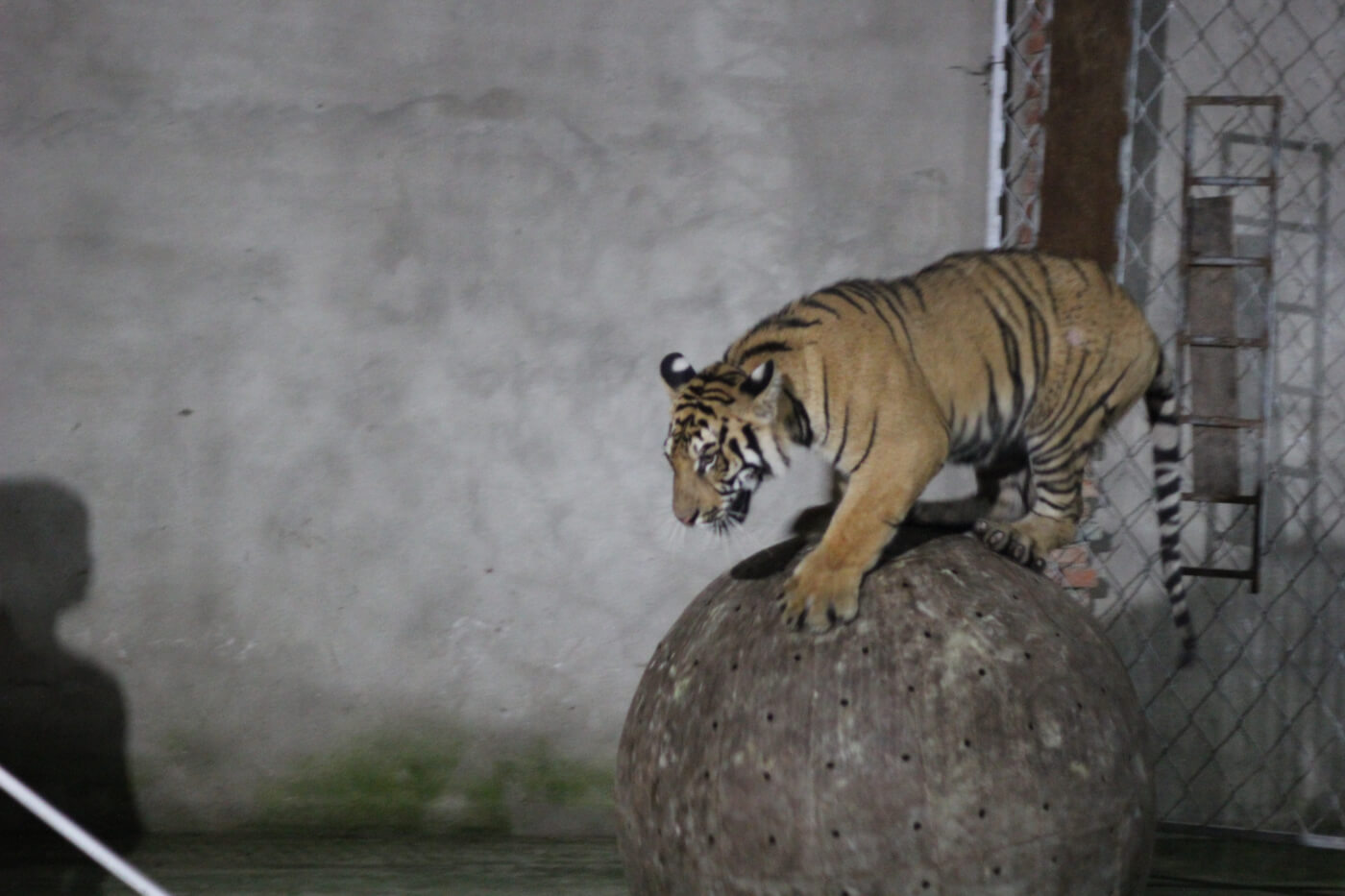 Circuses routinely cart tigers from town to town in barren cages that deprive them of opportunities to fulfil their basic needs to exercise, roam, socialise, forage, and play. They’re often taken from their natural environment and enslaved – solely for the purpose of entertainment. Many have no choice but to eat, drink, sleep, defecate, and urinate in the same place. Then, in front of audiences, they’re made to balance on balls, roll around on the ground, and stand on their hind legs out of fear of violence – as was the case at this circus in China. Thankfully, wild-animal circuses have now been banned across most of the UK, but be sure to avoid such spectacles when on holiday abroad.

The exotic “pet” trade is big business – and it causes animals horrendous suffering. Humans who choose to keep tigers as “pets” support cruel breeding practices and don’t understand that their complex needs can never be met in captivity. Being kept as a “pet” is no life for large animals with predatory instincts, and no home can provide them with the environment they’d enjoy in nature.

Owners often confine tigers to garden cages – preventing them from engaging in instinctual behaviour – and declaw and/or chain them to keep themselves safe. Exotic species don’t make good companion animals, and many are eventually abandoned once the novelty wears off. If you have the time, money, and commitment needed to care for an animal, save a life by adopting a domestic cat or a dog from your local shelter.

Often thought to be a rare species of tiger, white tigers are in fact inbred Bengal tigers. The massively cruel practice of inbreeding has caused white tigers to develop genetic health problems such as cleft palates, scoliosis, mental impairments, and crossed eyes. Out of a litter of cubs, breeders will pick the white ones – who bring in a lot of money – for sale to pseudo-sanctuaries and other exhibitors. Those who don’t meet the colour requirement are euthanised, inhumanely killed, or neglected. Only visit reputable, accredited sanctuaries, which never breed animals but rather help fund their conservation in their natural homelands.

6. Tigers Are Farmed for Their Skins, Traditional Medicine, and More

While some tigers are held captive in the name of entertainment, others are farmed for their body parts. In China, there are huge, industrial big-cat farms, where tigers are confined to cages the size of a small kitchen – with no room to run and nothing to climb. Many stressed animals pace back and forth for hours on end and bite at their own limbs and tails. Eventually, they’re slaughtered. Their body parts are sold for use in traditional medicine, their bones are soaked in alcohol and turned into “tiger wine”, their skins are turned into rugs for home decor, and their flesh is served up in restaurants. Some tigers bred in Europe also ended up being sold to be slaughtered for their body parts in Asian countries. Be careful what you buy – the only way to know for sure that you’re not supporting cruelty to animals is to buy vegan.

More You Can Do

PETA had a ‘Dead Dog’ delivery for the Formula 1 CEO. But why?