BREAKING: Videos Show Mice Swimming for Their Lives in University of Bath Laboratories

PETA has obtained video evidence documenting the misery of animals used in forced swim test experiments in University of Bath laboratories. The university continues to use the cruel and worthless test, despite learning from PETA that it lacks scientific and ethical value.

What Are University of Bath Experimenters Doing to Mice?

University experimenters place mice in sheer-sided containers of water and watch them paddle furiously in search of an exit, desperately trying to keep their heads above water. At times, they momentarily stop swimming and start floating.

Experimenters time how long it takes the trapped animals to start floating, on the absurd assumption that this somehow relates to the psychological states of humans with clinical depression. Experimenters at Bath specifically say in their project licence authorising the cruel test that “the time an animal spends immobile in the test is used as an index of depression-related behaviour”. This has been refuted by the scientific community and even some groups that are in favour of animal testing.

Bath experimenters were approved to use up to 8,750 animals over five years in studies that included forced swim tests. Mice naturally find submersion in water aversive and will avoid the experience if possible. The experimenters would have us believe that the mice experience only brief, moderate discomfort, but this is no spa day for them.

The test induces panic and terror in vulnerable mice and is not a reliable tool for investigating depression or other neurobehavioural disorders or for identifying potential drugs for human use. The wider scientific community condemns the test, and more and more companies are phasing it out.

The University Refused to Listen to PETA Experts

After learning that the university is allowing mice to be used in the forced swim test, PETA shared information with the institution about its lack of scientific and ethical value. Despite claiming to be open and transparent in its policies and procedures, the university delayed responding to PETA’s Freedom of Information request – which sought a small sample of the forced swim test footage – until we lodged a complaint and called for an internal review. Even though the scientific community has demonstrated that the test is scientifically flawed, the university’s animal welfare and ethical review body (AWERB) discussed the matter and decided that it will continue to allow the use of the forced swim test. This just goes to show that as long as an experimenter fills out the right paperwork, there are very few limitations on the atrocities that can be inflicted on animals in laboratories.

The university would have us believe that its AWERB “rigorously review[s]” each protocol that includes the use of the forced swim test. However, when asked why they were using a subjective, invalid model of human depression, experimenters informed the AWERB that the forced swim test is “pharmacologically validated and well-established”. Outrageously, no further justification was required.

This cruelty must stop. We’ll continue campaigning until all animals are spared suffering in the useless experiment.

These Organisations Are Saying Goodbye to the Cruel Test

After PETA provided King’s College London with scientific evidence showing the failings of the forced swim test, the university confirmed it does not intend to conduct the test on any species going forward. In September 2020, the University of Adelaide announced it would no longer subject animals to the cruel test. Fourteen companies – including pharma giants GlaxoSmithKline, AstraZeneca, Pfizer, Johnson & Johnson, Roche, Bristol-Myers Squibb, Bayer, Novo Nordisk, AbbVie, Boehringer Ingelheim, and Sage Therapeutics – have also banned the test after hearing from PETA or its affiliates.

It’s time the University of Bath followed suit and invested in humane, human-relevant, non-animal methods instead.

What You Can Do for Mice

Join PETA in urging the University of Bath to ban the near-drowning of animals. Using forced swim tests in an attempt to study human mental illness is not only appallingly cruel but also utterly pointless. These experiments do nothing more than waste animals’ lives and delay the development of new, effective treatments that are desperately needed.

Send the university a message urging it to ban the forced swim test: 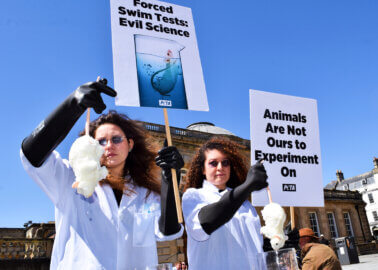 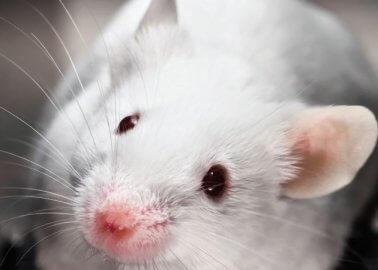 When Will the University of Edinburgh Stop Using the Forced Swim Test?