According to HorseDeathWatch.com, four horses lost their lives at the deadly Cheltenham Festival last year, adding to a staggering death toll that reached a 10-year high in 2016.

Cheltenham 2018: Horse racing 'should be BANNED' as racehorses are ‘slaughtered for food' https://t.co/avmQxSqs4Y pic.twitter.com/23qdafAVyw

Horses bred for greed and speed are pushed beyond their natural abilities and forced to run at breakneck pace on this deliberately hazardous course. Those who don’t sustain horrific injuries when they crash face-first onto the track may suffer heart attacks, bleed from their lungs, or develop painful ulcers and other health problems that come only from being pushed to the breaking point for human amusement.

Drugs – both legal and illegal – have been administered by trainers and even veterinarians to mask pain so that horses who should be recuperating instead run with injuries, exacerbating them.

Of course, even those who make it off the track alive don’t always live happily ever after. Every year, thousands of horses – including spent Thoroughbreds and those who don’t “make the grade” – are discarded like used betting slips. They’re abandoned, neglected, or sold for slaughter, their flesh ending up either in dog or cat food or as “prime cuts” for human consumption in Europe and Asia. True sports involve only willing participants – horses shouldn’t have to suffer and pay with their lives so that punters can win a few quid.

Learn More About the Cruelty Behind Horse Racing 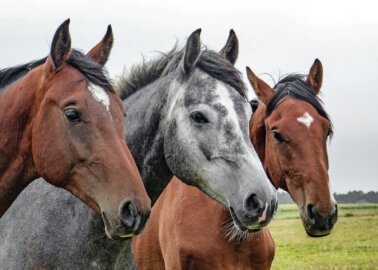