Today, 11 March 2021, marks the eighth anniversary of the EU’s precedent-setting bans on cosmetics tests on animals and the sale of animal-tested cosmetics coming into force. But PETA isn’t celebrating.

Despite assurances that animals would no longer suffer and die for the sake of toothpaste or lipstick, cosmetics ingredients are still being forced down the throats of rats and rabbits. EU authorities are undermining the bans and demanding that animals be used in cruel and avoidable procedures. Here’s what PETA is doing about it and how you can get involved.

Hang On – Why Aren’t the Bans Working?

In 2013, the EU Cosmetics Regulation came into full force – and with it bans on animal testing for cosmetics products and their ingredients and on the sale of cosmetics that rely on new animal test data for safety assessment purposes. This should have meant that consumers could be confident that any cosmetics product or ingredient developed after 11 March 2013 would not be tested on animals.

Yet the European Chemicals Agency (ECHA), supported by the European Commission and the ECHA Board of Appeal, is still demanding new tests on animals for cosmetics ingredients under the guise of the REACH chemicals regulation. This completely circumvents the purpose of the Cosmetics Regulation – which is to bring safe cosmetics to market without requiring tests on animals – and puts animals back in laboratories.

To make matters worse, the European Commission is working on plans that could further weaken the Cosmetics Regulation and see a reversal of the hard-won protections for animals it contains. This would result in the suffering of many more animals in cruel, pointless cosmetics tests and severely limit the development of cruelty-free products and ingredients.

So What Can Be Done?

We have been fighting this issue since it first arose and will keep doing so until animal tests for cosmetics are history. We recently joined forces with other animal protection groups to urge the president of the European Commission to suspend all requests for cosmetics ingredients tests on animals and allow companies to demonstrate the safety of ingredients using only non-animal methods.

Compassionate celebrities including Kimberly Wyatt, Jessica-Jane Stafford, Stephanie Pratt, and Dave Navarro have supported our call for an end to cosmetics tests on animals. We never thought these images would still be relevant today, but we will keep working to end animal testing. 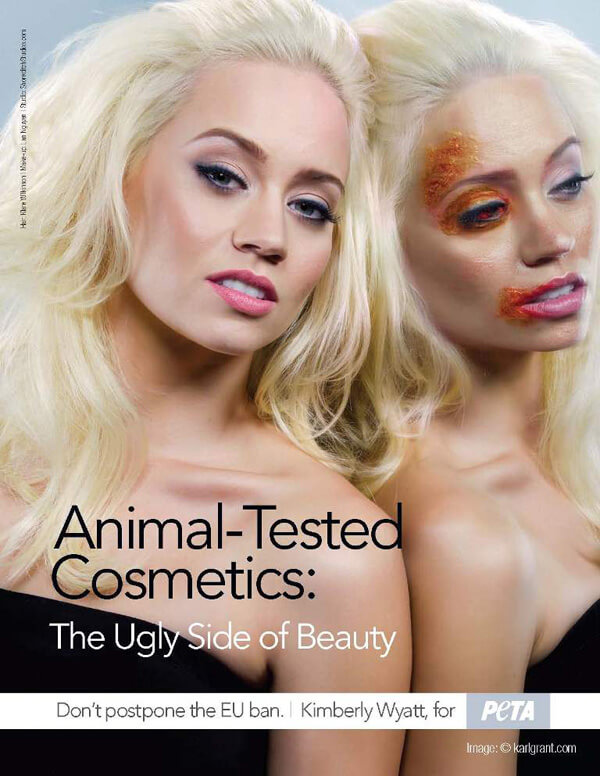 Together, We Can Achieve Change: Act Now!

Do your part by always using cruelty-free products, and when in doubt, check the PETA US global database of companies that do and don’t test on animals.

No animal deserves to suffer and be killed for the sake of lipstick or toothpaste. Don’t let cosmetics tests on animals sneak in through the back door. Make your voice heard – take action now: