A trio of models crashed the first day of London Fashion Week to let attendees know that there’s nothing stylish about cramming sensitive animals into pits, hacking them apart, and leaving them to die.

A recent PETA exposé of crocodile farms in Vietnam – including two that have supplied skins to a tannery owned by Louis Vuitton’s parent company, LVMH – revealed what life and death are like for many of these victims of the fashion industry, whose skin is used to make “luxury” leather bags, belts, and watch straps sold around the globe.

Animals who are farmed and killed for their skins suffer all over the world. Footage from reptile farms on three continents tells the same miserable story: grim conditions, close confinement, and a violent death. Please refuse to support this cruelty – don’t ever buy or wear products made from exotic skins. And you can do even more: urge luxury fashion company LVMH to shed exotic skins from Louis Vuitton and all its other brands. 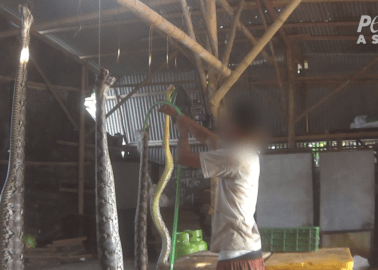