Foie Gras Production Has Been Banned in the ‘Capital of Europe’

Good news! Foie gras production has been banned in the Brussels-Capital Region.

As the home to many European Union institutions, Brussels is setting a precedent for the demise of this hideously cruel industry with this move. With regard to the ban, Brussels’ Minister for Animal Welfare said, “[Foie gras production] is truly a kind of torture imposed on ducks, and we can hardly tolerate it”.

It’s hard to imagine anything more unethical than the foie gras industry, in which workers shove long metal tubes down ducks’ and geese’s throats in order to pump large quantities of grain into their stomachs several times a day. This causes their livers to swell to up to 10 times their normal size, and when they’re eventually slaughtered, the fatty, diseased organs are sold as foie gras.

Not only do birds endure the agony of force-feeding, they also live in squalid, cramped conditions. As their livers swell in the final weeks of their lives and press against their lungs, they struggle even to breathe. PETA’s eyewitness investigation of the industry helped show the public how cruel foie gras production really is.

It’s a huge step forward for Brussels – known unofficially as the “Capital of Europe” – to take a stand against this abusive industry, and PETA has written to Belgium’s Minister for Agriculture to urge him now to ban production across the country. Belgium is one of five European countries – alongside Bulgaria, France, Hungary, and Spain – still producing foie gras. Part of PETA’s letter reads as follows:

Foie gras production is illegal in the UK and more than a dozen other European countries – including Germany, Luxembourg, and the Netherlands – and more and more countries around the world are outlawing the cruel practice of force-feeding birds. It’s high time that Belgium followed suit.

Veterinarians and experts agree that there’s no humane way to produce foie gras. If you see this vile product on shelves or restaurant menus, please take action by letting the management know how this “luxury” food is made:

How to Speak Out Against Foie Gras 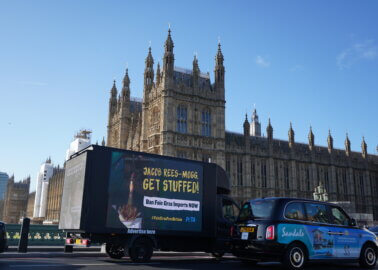 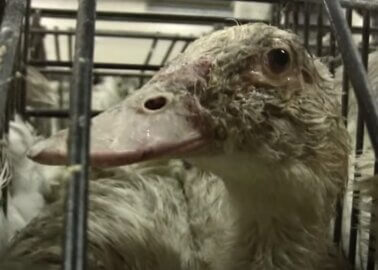