A shocking investigation revealed that terrified young monkeys in Thailand are kept chained, abusively trained, and forced to climb trees to pick coconuts used for coconut milk, oil, and other products.

Denied the opportunity to move around freely, socialise with others, or do anything else that’s meaningful to them, these intelligent animals slowly lose their minds. With this much cruelty involved in the process, can we really still consume coconut products with a clear conscience? 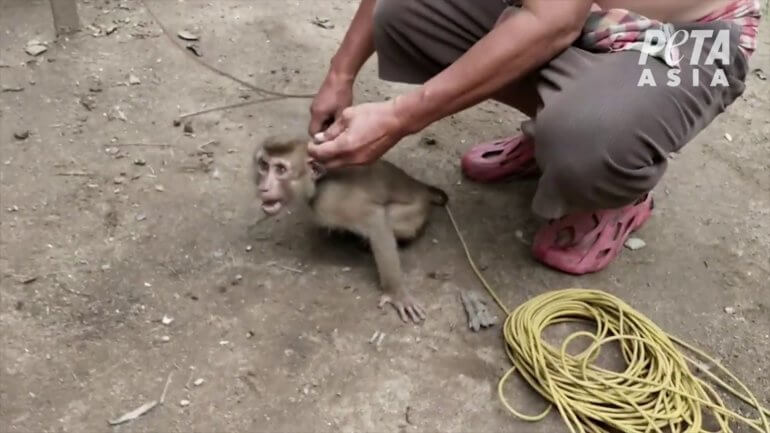 Coconut milk is vegan. Unlike cows’ milk, for which mums and babies are torn apart so humans can consume mammary secretions, coconut milk doesn’t come from an animal.

Coconut milk is made by grating the white flesh inside a mature coconut and soaking it in hot water. It doesn’t involve stealing anything from an animal. Other coconut products are manufactured using similar processes and don’t naturally contain any animal-derived ingredients – please do check the labels, though, as some additives may not be vegan.

Just because coconut products don’t contain animal-derived ingredients doesn’t always mean they don’t cause harm. As the investigation into the Thai coconut industry revealed, monkeys may be abused and exploited for coconut picking so that these products can end up on our shelves.

How to Make Sure Your Coconut Products Were Sourced Ethically

Here’s the good news: more than 25,000 stores around the world have committed to never stocking products sourced from monkey labour after speaking with PETA and its affiliates, including all major UK supermarkets.

See a list of brands that have made this commitment here to help make sure that your coconut products don’t come from suppliers that use monkey labour:

In general, coconut farms in Brazil, Colombia, Hawaii, India, and the Philippines don’t use monkey labour, and because coconut water is usually taken from coconuts grown on dwarf trees, its production typically doesn’t involve monkeys.

Please make sure that your coconut products don’t come from suppliers that use monkey labour. Avoid Chaokoh and all coconut products from Thailand that are picked by monkeys. And please sign our action alert to urge Chaokoh to stop supporting this cruel industry.

LIVE: PETA Entities Are in Ukraine, Moving Mountains to get to Animals in Need