Positioned above a banner proclaiming, “TUI: Drop SeaWorld,” a 6-metre-long, listless “orca” made a splash outside TUI’s UK headquarters today.

PETA supporters held signs proclaiming, “TUI Profits From Orcas’ Misery,” to call on the UK’s largest travel provider to stop giving a financial lifeline to facilities which hold orcas and other dolphins captive.

The protest follows recent announcements by British Airways and Virgin Holidays that they have cut ties with cruel marine abusement parks.

While orcas in the wild form complex social bonds, work together to find food, and traverse up to 140 miles of ocean every day, those at SeaWorld are housed in incompatible groups inside cramped tanks and have even been given the drug diazepam to manage stress-induced aggressive behaviour.

Forty-two orcas and countless other animals have died on SeaWorld’s watch – far short of their natural life expectancies.

Last year, following intense pressure from PETA, travel giant Thomas Cook announced that it would stop selling tickets to all parks that confine orcas in the name of entertainment.

What You Can Do for Orcas in Captivity

If you haven’t already done so, please contact TUI and urge it to drop SeaWorld.

If you’re interested in taking part in future demonstrations for this campaign or others like it, please join our Action Team today. 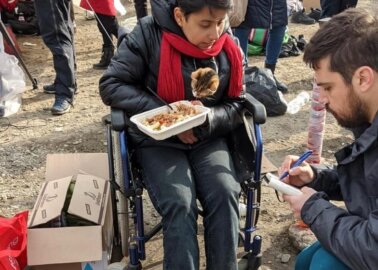