The 2016 Lush Prize – What Went Down Yesterday in London

The Lush Prize honours the innovators who are working to end cruel animal experiments, and PETA is proud to be part of that struggle.

One of the ways that cosmetic brand Lush opposes cruel animal experiments is by accelerating the work of those seeking alternatives. The Lush Prize not only honours innovators but also offers a cash prize to advance their efforts. Here are some highlights from the 2016 Lush Prize conference and awards ceremony.

The theme of this year’s conference is “Regulating Chemical Safety – the Future for Animal Use”, and PETA UK’s Science Policy Adviser Dr Julia Baines presented the work that the PETA International Science Consortium Ltd does to reduce the impact of the European Union’s REACH regulation on animals.

The animal testing implications of REACH are enormous. Tens of thousands of substances are expected to be registered under this regulation, which could ultimately result in millions of rats, mice, rabbits, and other animals being force-fed chemicals or injected or gassed with them for days, weeks, or months at a time or even for their whole lives. However, non-animal testing is within REACH, and the Science Consortium has adopted a number of approaches to ensure that animals are used only as a last resort.

Last year, the PETA International Science Consortium won the Lush Prize for Training for its broad approach to providing companies and regulators with educational outreach. And this year, its associate director and PETA UK’s Head of Science Dr Gilly Stoddart was thrilled to sit on the 2016 prize-judging panel alongside other distinguished scientists and campaigners.

PETA is honoured to be part of such an amazing event, and the Lush Prize continues to inspire us. Learn more about PETA’s work and how the Science Consortium promotes and funds non-animal research methods to champion the best non-animal methods available and eliminate tests on animals, or make a donation to support PETA’s work for all animals: 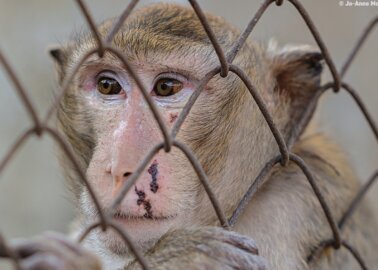