What Did PETA Give Boris and Carrie Johnson’s Baby?

Following the birth of Prime Minister Boris Johnson and Carrie Johnson’s baby girl Romy, PETA is sending the happy parents a special baby gift: a bobble hat with a twist.

The black faux-fur pom-poms are made of the world’s first faux bear fur, created by PETA and luxury faux furrier ECOPEL. The innovative fabric is lightweight and soft – and it looks and functions exactly like the bearskin used to make the Queen’s Guard’s caps.

We extend our best wishes to the new parents and hope the gift will inspire the prime minister to make the world a kinder place for his daughter and for bears by nixing cruelly produced bearskin caps.

One Cap – One Bear

It takes the skin of at least one bear to make just one of the caps currently used by the Queen’s Guard.

Some bears are shot several times before they die, and some escape only to bleed to death. When mother bears are killed, their cubs are left to starve.

Our Taxes Are Paying for the Slaughter of Bears

A Freedom of Information request revealed that in the past seven years alone, the Ministry of Defence (MoD) spent more than £1 million of taxpayers’ money on 891 bearskin caps – which are ornamental and serve no military purpose.

ECOPEL has offered to provide the MoD with faux bear fur free of charge until 2030, meaning the switch would also save money.

Here are two simple steps you can take to help bears: 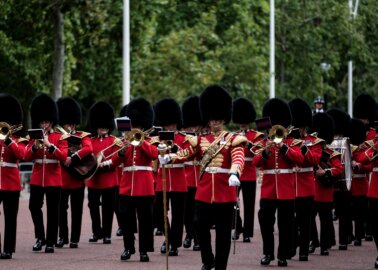