What Is a ‘V’irkin and Why Have We Sent One to Victoria Beckham?

Victoria Beckham is known for her love of exotic-skin Birkin bags, but in the wake of yesterday’s shocking exposé of Hermès’ suppliers’ cruelty to animals, we hope she’ll reconsider.

PETA US sent the fashion designer a letter sharing the findings of its eyewitness investigation of Hermès-supplying alligator and crocodile farms, where animals were packed into dark sheds or barren concrete pits. Instead of growing up with their protective mothers in family pods, alligator hatchlings were orphaned at birth and killed just one year later. Workers crudely hacked into the necks of some alligators and tried to scramble their brains with metal rods – and some of the animals were still conscious and flailing their legs minutes after workers cut into them.

To encourage Posh to make the cruelty-free switch, PETA US also sent her a unique gift: a special-edition “V”irkin bag, the brand-new mock-croc handbag by award-winning Freedom of Animals – an H&M Conscious Commerce collection partner that’s been dubbed the “Céline of vegan fashion” for its high-end, minimalist vegan handbag designs.

Every Birkin bag means that a beautiful, sensitive animal endured a miserable life and experienced a gruesome death. We hope the gorgeous “V”irkin bag will inspire Victoria to embrace vegan fashion and leave all exotic-animal skins out of her wardrobe and clothing line, as she’s already done with fur.

You can help alligators and crocodiles by choosing cruelty-free fashion and by sending a message to Hermès’ management demanding that the company stop selling items made from alligator and crocodile skins. 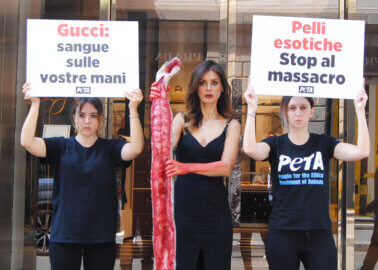 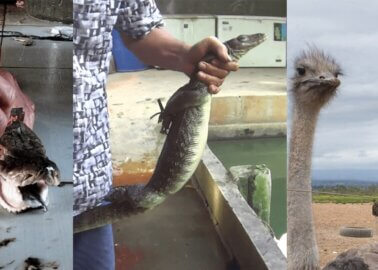