Last week, ahead of World Day for Animals in Laboratories (24 April), people all across Italy spotted these crying “monkeys”:

Archaic experiments that torment sensitive and intelligent monkeys have no place in the 21st century. We are calling on everyone to help direct the EU towards an innovative and compassionate future by signing the “Save Cruelty Free Cosmetics” European citizens’ initiative (ECI), an EU-wide movement calling on the European Commission to commit to a Europe without animal testing.

What’s Being Done to Animals in EU Laboratories?

Millions of animals, including monkeys, dogs, mice, and rabbits, are used in experiments across the EU. Experimenters often deliberately infect them with debilitating pathogens or force thick tubes up their nostrils or down their throats so that experimental drugs can be pumped into their stomachs. The animals may experience adverse effects such as vomiting, internal bleeding, respiratory distress, fever, weight loss, skin problems, organ failure, and even death.

In neuroscience studies, experimenters use dental cement to affix bolts to monkeys’ exposed skulls so that they can screw them into a “primate chair”, rendering their heads immobile. They may also embed electrodes in monkeys’ brains to record electrical activity. They restrict the animals’ food or water, because hungry or thirsty monkeys work harder at repetitive tasks in hopes of being “rewarded” with a morsel of food or a sip of water. The monkeys must endure these tests for hours at a time – often for years – only to be killed and dissected when they’re no longer of any use.

Why Are Cosmetics Tests on Animals STILL Allowed in the EU?

Experimenters also continue to use thousands of animals in tests for cosmetics ingredients, even though the EU banned cosmetics testing on animals nearly a decade ago. Under separate EU chemicals regulations, authorities are demanding that ingredients that have a long history of safe use be tested on animals. So although there is a ban under one regulation, another regulation is being used to justify continued testing.

The kinds of tests being required are often hideous, long-term, chronic toxicity tests that involve force-feeding ingredients to rats and rabbits, including pregnant individuals, for weeks or even months on end.

We know that thousands of animals have already been subjected to tests since the ban came into effect and that tests demanding the use of thousands more are in the pipeline, so we must act urgently.

You Have the Power to Help End Tests on Animals

PETA has helped set up an ECI, a formal mechanism for EU citizens to have a say in the EU law-making process. We’re asking that the ban on cosmetics testing on animals be upheld and strengthened to end these tests. Furthermore, the ECI calls for all future chemicals management to be done without new requirements for tests on animals and for the EU to commit to ending all experiments on animals.

Are You an EU Citizen?

If you are an EU citizen, please sign the “Save Cruelty Free Cosmetics” ECI. As it’s a formal initiative giving you a say in EU law, it requires some additional details such as your address and other identification. Please take a minute for animals and vote for a world in which they no longer suffer in cruel cosmetics tests:

Not an EU Citizen?

Please share the link to the ECI and ask your European friends to sign it. Animals need 1 million EU citizens to take action, so every signature counts:

A Uni Down Under, the University of South Australia, Comes out on Top for Mice 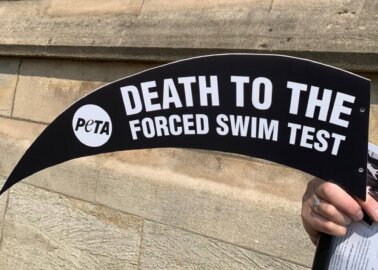 PETA Haunts the University Of Bristol with Grim Reapers