A disturbing new video has emerged showing horrific conditions on a Fayre Game quail-egg farm in Lytham St Annes, Lancashire. Supermarket chain Booths reportedly dropped the company as a supplier after being made aware of the footage.

The video, posted to Facebook, appears to show hundreds of quails at the facility crammed into tiny wire-mesh cages, where they’re unable to carry out any kind of natural behaviour, such as nesting, dust-bathing, or establishing a social order. Many are missing feathers – likely as a result of the stress of their extreme confinement. The bodies of dead birds, evidently left to rot among their living flockmates, can also be seen in the cages.

Shockingly, such routine cruelty is often perfectly legal. In fact, a spokesperson for the farm claimed that the conditions “are compliant with current legislation” and stated that inspectors from the government’s Animal and Plant Health Agency had found no breaches of the law. This is yet more evidence that rules and regulations often do very little to protect animals in an industry that treats them as commodities rather than living, feeling beings.

The best thing you can do to help prevent quails and other animals from suffering on farms is to go vegan. Order one of our free vegan starter kits today for more information and guidance on making the switch.

Powys named ‘Worst Council in the UK’ by PETA 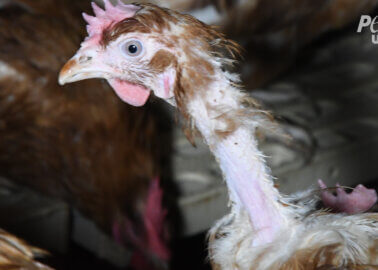