‘Dog’ Barbecued by Vegans in Southampton

In the midst of barbecue season, several PETA supporters cooked a “dog” on Southampton’s Above Bar Street on Thursday. A banner on display proclaimed, “If You Wouldn’t Eat a Dog, Why Eat a Pig? Go Vegan!”

When it comes to the capacity to suffer and feel pain and fear, a dog is no different from a pig, a chicken, or a cow. We’re urging anyone repulsed by the prospect of chowing down on dog meat to extend that compassion to all other animals and go vegan.

Does It Make You Think?

The powerful demonstration raised concerns from passers-by, who were horrified at the thought of eating dog meat – as they should be. But when you think about it from a logical standpoint, all animals experience fear and pain and value their lives, so none should be killed for a burger or a sandwich.

Every person who goes vegan spares the lives of nearly 200 animals a year. Cows in the meat industry are often confined to filthy factory farms and may spend their entire lives indoors. At the slaughterhouse, workers shoot them in the head with a captive-bolt gun, hang them up by one leg, and cut their throat.

Whilst the notion of a hog roast may be detached from the horrific reality of pig slaughter, we need to be reminded that pigs are actually friendly, loyal, and intelligent animals, who often outperform dogs in learning tests. They’re naturally very clean, live in small family groups, and love playing, exploring their surroundings, foraging for food, and building nests for their offspring.

But pigs imprisoned on factory farms don’t have the chance to engage in this natural behaviour. Crammed into barren concrete pens, they may never see the sun or breathe fresh air. The cruelty continues at the abattoir – the animals are hoisted upside down by their back legs and their throats are cut, often without effective stunning. About 10 million pigs meet this fate each year in the UK alone.

Good Not Only for Your Conscience but Also for Your Health

Vegan barbecues are reportedly 43% healthier than meaty ones, and producing and barbecuing a single burger made from cows releases enough carbon dioxide into the atmosphere to fill more than 60 party balloons, compared with eight for a vegan burger. The meat industry also endangers public health on a global scale, from fostering deadly viruses to contributing to starvation in the developing world.

By contrast, eating vegan has been proved to help you live longer. It also drastically improves your quality of life by helping you stay fitter, healthier, and feeling great – especially because what you’re eating isn’t causing animals any suffering.

Sensitive, scared lambs, cows, and pigs are sent to their deaths only because of human prejudice, which causes us to treat them as mere commodities to slaughter for a taste or on some other frivolous whim. Other species, meanwhile, are protected, brought into our homes, and made part of the family. This is why the protesters in Southampton held up signs reading, “End Speciesism!”

Think about it this way: most humans wouldn’t dream of keeping their dog in a cramped, crowded shed on a slab of filthy concrete, which is how pigs are treated in the food industry – even though they experience pain, joy, fear, and misery just as dogs and humans do. We therefore urge anyone who’s repulsed by the thought of eating their beloved companion dog or cat to extend that compassion to the entire animal kingdom.

The meat, egg, and dairy industries are a nightmare for animals, who are treated like a collection of body parts, not sentient individuals. Go vegan to spare them a lifetime of suffering and eventual slaughter:

The “dog” isn’t real; it’s a prop. If the idea of eating a dog repulses you, please extend that compassion to all other animals and go vegan.

The Death of Sir David Amess 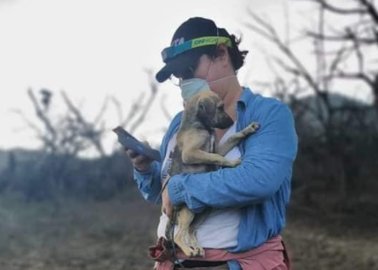