Giant ‘Babies’ Descend on Millennium Bridge, Speak Up for Calves

Two giant PETA “babies” holding signs proclaiming, “Cows’ Milk Is for Baby Cows” and “Not Your Mum? Not Your Milk!” descended on Millennium Bridge today to highlight the absurdity of drinking cows’ milk.

The demonstration came in the lead-up to World Plant Milk Day and urged passers-by to consider just how unnatural and cruel it is to drink another animal’s bodily fluid – especially when there are so many versatile non-dairy milks available.

Cows’ Milk Is for Calves, Not Humans

Guzzling the milk of any species past weaning age, let alone that of a cow who was forcibly impregnated and whose baby was taken from her, is beyond bizarre.

Like all mammals – including humans – cows produce milk for their babies. They’re excellent mothers when given the chance, but on dairy farms, they endure the repeated cycle of artificial insemination and birth, only for their babies to be torn away so that the milk that nature intended for them can be consumed by humans, who don’t need it.

Humans are the only species on the planet to drink milk as adults – and the only one to drink the mammary secretions of other animals. Cows’ milk is for cows. Rats’ milk is for rats. Oat milk is for humans. Easy.

Cows’ milk is perfect for calves – it is high in fat and enables them to gain hundreds of kilos in a matter of months. But for humans, it’s a common trigger for allergies and associated with an increased risk of many illnesses.

The consumption of dairy has been conclusively linked to acne, osteoporosis,  increased risk of fractures – cows’ milk actually robs our bones of calcium – and even prostate and ovarian cancer. Cholesterol – found only in animal “products” such as cows’ milk – and animal fat clog arteries, leading to heart attacks and strokes.

Cruel to Mums and Babies

The dairy industry fuels cruelty to animals on a huge scale. Cows form complex socials bonds with their families – they suffer when separated from them and mourn the deaths of loved ones. Sometimes, they shed tears over their loss. Yet on dairy farms, even organic ones, babies are torn away from their mums. Female calves are raised to be used as milk-making machines, while males are either shot at birth or sold to the veal industry.

Year in, year out, cows endure this nightmarish cycle of rape and forced separation until their bodies are exhausted and no longer produce enough milk to be commercially viable. Then, they’re slaughtered.

Cows’ natural life expectancy is 21 years or more, but most are killed at 4 to 7 years old – sometimes when pregnant. Each year, British farmers send about 150,000 pregnant cows to slaughter.

The reality of consuming cows’ milk is grim – for us and other animals. Try eating – and drinking! – vegan instead. Order your free copy of PETA’s colourful vegan starter kit, which is packed full of recipes, tips on making the switch, and much more. 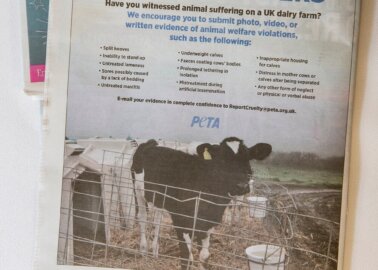