Markle Gives Fur a Thumbs Down

According to Markle’s former agent, Gina Nelthorpe-Cowne, the former Suits star refuses to wear fur on ethical grounds. She certainly isn’t alone. Last year, the White House announced that first lady of the United States Melania Trump would also not wear fur, after she received a faux-fur gift from PETA and Honorary Director Pamela Anderson.

@flotus
Dear Melania,
Thank you for your sweet note.
It is heartwarming to see you
manage your position with such beauty and grace.
Pamela pic.twitter.com/h9mmdqxp0h

John Galliano, Versace, Michael Kors, Gucci, and more join Markle in opposing fur. These influencers’ and designers’ refusal to align themselves with the cruel fur industry is a sign that times are changing.

What About Leather? Fauxget About It

By choosing to oppose fur and leather, Markle is actively helping to stop the global skins trade. Whether it came from an animal on a fur farm or one who was trapped in the wild, every fur coat, trinket, and bit of trim caused an animal tremendous suffering—and took away a life.

PETA congratulates Markle—not just on her upcoming nuptials but also for being such an inspiring, compassionate role model to so many. Find out just how easy it is to make kind choices like hers. 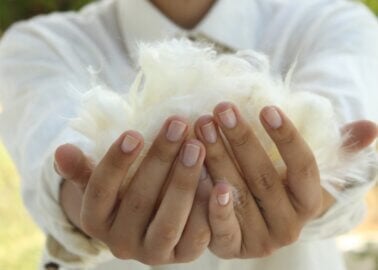