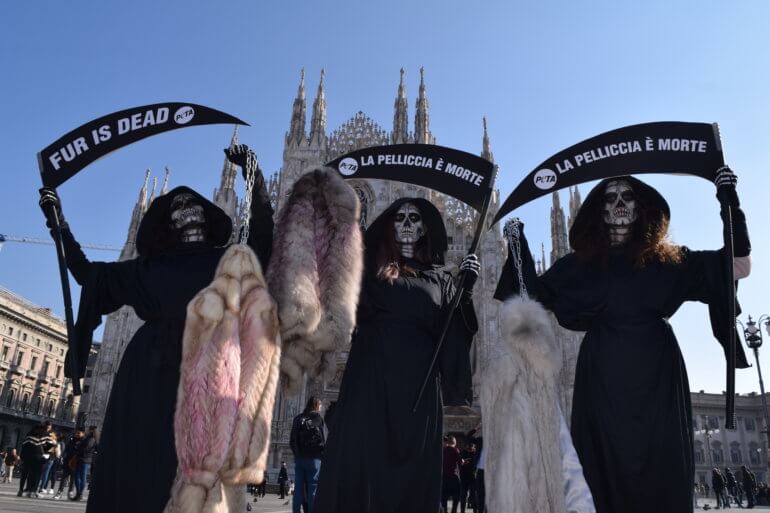 The bone-chilling spectacle came after Italian actor and TV presenter Elisabetta Canalis sent a letter on PETA’s behalf calling on the National Chamber for Italian Fashion to ban animal fur from the event.

Every year, over 100 million animals are killed for their fur. On fur farms, animals are confined to cramped wire cages, denied the opportunity to do anything that’s natural or important to them, and killed by electrocution, neck-breaking, or drowning.

Jo-Anne McArthur / The Ghosts In Our Machine

Animals are also caught in their natural habitat in steel-jaw traps and left to languish – sometimes for days – before succumbing to dehydration, starvation, disease, or attacks by predators or being bludgeoned to death by returning trappers.

It’s clear that fur is headed for the history books, as the majority of today’s fashion designers – including Jean Paul Gaultier, Gucci, Armani, Versace, Ralph Lauren, Vivienne Westwood, and Stella McCartney – have policies against using it in their collections.

Other high-end fashion events, including Oslo Fashion Week and Melbourne Fashion Week, have banned fur from their catwalks, while faux-fur manufacturer Ecopel has announced plans to produce a new faux fur made from recycled plastic bottles in order to alleviate both animal suffering and the impending plastic-pollution crisis.

Many countries – including the UK, Austria, and Serbia – have also outlawed fur farming.

As the list of designers ditching fur continues to grow, it’s time for all fashion events to get with the times, stop supporting the cruel fur trade, and ensure that pelts are never again paraded on their catwalks. Please join us in urging the British Fashion Council (BFC) to ban fur at all its events, including London Fashion Week.

You can do even more to help animals used for their fur by signing five other crucial letters and petitions today.

Urge the BFC to Ban Fur

Platinum Jubilee: God Save the Queen (and the Bears), Says PETA

Wildlife Photographers to MoD: The Only Way Bears Should Be Shot Is Through a Lens