Pigs on UK ‘High-Welfare’ Farm Filmed Eating Each Other Alive

In Northern Ireland, pigs on a “high-welfare” farm – with “Red Tractor” certification – were filmed with gaping wounds and bloodied faces. They were eating each other alive, and many had been left to die on the farm floor. 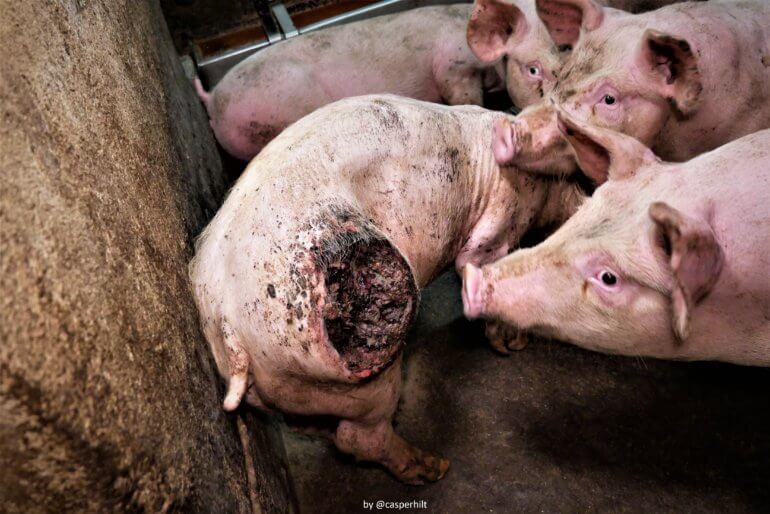 The images and footage were taken by campaign organisation Meat the Victims. Activist Tuesday Goti led the undercover investigation into the farm and told Metro the experience was “absolutely harrowing”.

According to the Red Tractor website, the label “is a simple way for people to recognise food and drink that has been produced to high quality standards” and assures “you are choosing food you can trust”. This leads consumers to believe that the meat they’re buying comes from animals farmed under “high-welfare” standards assured by the government.

Red Tractor claims that it conducted an unannounced inspection of this farm within the six months prior to the protest and saw nothing alarming.

The label is actually a convenient way to conceal the same exploitation and bloodshed we see on “non-assured” farms. It’s used to make consumers feel better about buying and eating the flesh of defenceless animals. In no way do the sentient beings on “Red Tractor”–approved farms have a decent life before being slaughtered.

The kind of suffering the eyewitnesses documented is inherent in the meat industry. From the horrors documented at Hogwood pig farm to PETA’s exposé of a UK farm where piglets were caged, illness is always rampant, suffering is always the rule, the animals are always only a “unit” – a “commodity” – and slaughter is always cruel.

Eating meat means sentencing animals to death. Regardless of the label on a piece of meat or the certification of the farm it came from, none of the animals escape the abattoir. Babies, mums, dads – everyone is killed at one point or another.

Their families are torn away from them, and their bodies are hacked into pieces and packaged up for nothing more than a fleeting moment of taste.

There’s nothing ethical about commodifying living beings. The only label you can trust is one that says “vegan”, because you know no one had to die for the product.

The best way to help animals abused on farms is to stop supporting this cruelty.

If you care about animals and refuse to be deceived by farming assurance schemes any longer, take PETA’s vegan pledge or order a free vegan starter kit full of tips and recipes to help you make the switch: