As scorching temperatures gripped parts of the UK, a group of PETA supporters – one of them body-painted as planet Earth – headed to London’s Trafalgar Square to share an important message. 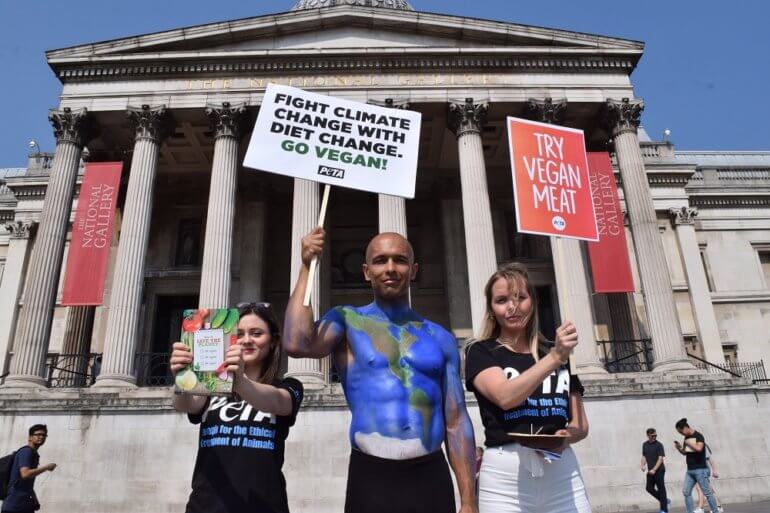 The activists gave away vegan sausages while calling on passers-by to fight climate change with diet change:

According to the Met Office, Monday was the hottest summer bank holiday on record. This is a crisis, not a cause for celebration, and PETA is calling on everyone to save our scorching planet by going vegan today.

The Meat Industry Is Destroying Our Planet

The meat industry isn’t just killing animals – it’s guzzling up our natural resources, spewing out contaminants, and heating up the Earth, too.

It’s a major contributor to pollution, land degradation, water shortages, and habitat destruction, and the United Nations has concluded that a global shift towards vegan eating is necessary to combat the worst effects of climate change.

It’s estimated that the amount of beef, lamb, and pork consumed in the UK needs to be reduced by 90% in order to meet our Paris Agreement carbon-emission targets. As well as destroying the planet, the meat, egg, and dairy industries sentence billions of sensitive animals to a miserable life and a terrifying death.

Order a free vegan starter kit to learn how easy it is to spare animals’ lives and help prevent environmental degradation.