An urgent open letter has been sent to the two remaining candidates for the Conservative Party leadership – Rishi Sunak and Liz Truss – one of whom will become the UK’s next prime minister.

The letter calls on Truss and Sunak publicly to commit to promises made in the government’s 2021 Action Plan for Animal Welfare, only four of which have been delivered on so far, as part of their leadership campaign. Sunak has pledged to support the Animal Welfare (Kept Animals) Bill, promising to ban live-animal exports and imports of hunting trophies if he becomes prime minister. But no promises have been made by either candidate to deliver the proposed bans on imports of fur and foie gras or the advertisement of tourist attractions that exploit animals, such as for elephant rides.

A Nation of Animal Lovers

National polling carried out by Focaldata in April 2022 showed that UK voters see animal protection as a priority. Of those polled, 72% of respondents – including 71% of those who voted Conservative in the last general election – stated that they would like the government to pass more laws designed to improve animal welfare and protect animals from cruelty.

Despite the public appetite for stronger protection for animals, the Conservative government has so far failed to deliver on many of its commitments. In the Queen’s Speech in May, when the government outlined its legislative agenda, the proposed bans on the import of foie gras, fur, and hunting trophies were shockingly absent in spite of pledging just a year prior to have and promote the highest standards of animal welfare and promising a raft of new laws to protect animals.

Sunak and Truss Must Speak Up

It is vital that the new leader introduce the promised legislation to protect animals. As the Department for Environment, Food & Rural Affairs has stated, “The way we treat animals reflects our values and the kind of people we are.”

The letter sent to Sunak and Truss encourages the candidates publicly to make the following three commitments:

You can read the open letter and view its signatories here.

Join these celebrities in demanding that the government ban imports of foie gras, fur, and hunting trophies – send it a message now! 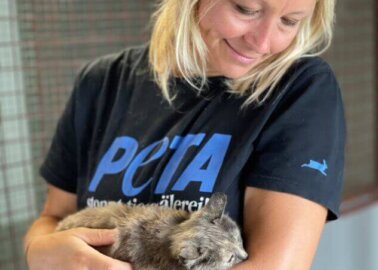 PETA Entities Are in Ukraine, Moving Mountains to get to Animals in Need

Free the Animals! The Rescue Stories of Little Britches, Prince, and Others – Tune In on 19 May