Less than 24 hours after we kicked our campaign to rid Benetton of angora into high gear with a day of nationally coordinated action, the Italian clothing company has bowed to pressure and banned angora in all its approximately 6,000 stores worldwide!

“Benetton Group confirms the decision to stop using angora wool in all its collections sold around the world”, the company communicated via a statement on its website.

Thank you to everyone who took action yesterday – whether by joining our protest in London, calling the store, posting on social media or sending an e-mail to Benetton management. All that hard work paid off!

This is wonderful news for angora rabbits. After an unprecedented investigation by PETA Asia of angora rabbit farms in China, the source of 90 per cent of the world’s angora, revealed that workers violently tear the fur out of rabbits’ skin as the animals scream in pain, store after store has vowed not to sell products made from angora wool. This is already having a significant impact on the ground in China: from 2013 to 2014, angora exports decreased by 74 per cent. This drastically decreased demand for angora wool means that fewer rabbits are suffering on Chinese farms.

We’re delighted that Benetton has joined the long list of angora-free companies that have responded to consumer demand and done the right thing for animals. Fortunately for fans of ethical fashion, humane animal-free fabrics are readily available.

Thank you again to everyone who helped make this victory happen – we couldn’t have done it without you! Please, keep on speaking out whenever you see angora on sale. And to be part of more victories for animals, join our action team today. 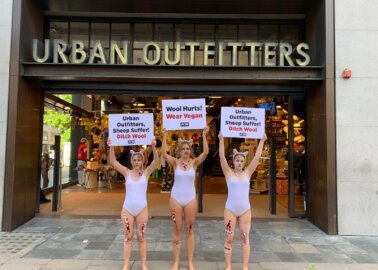