UPDATE: We won the vote in the European Parliament decisively, but EU finance ministers still have to approve plans to end the subsidies. Ask UK Chancellor George Osborne to do the right thing for bulls at meetings in Brussels this week – take action here.

438 out of 687 MEPs in the European Parliament voted in favour of an amendment that would stop over €100 million in EU agricultural subsidies from being used to raise bulls for bullfights.

This is a wonderful step forward and could be the final nail in the coffin for Spain’s already struggling bullfighting industry. As bullrings increasingly stand empty and fewer and fewer Spaniards show any interest in attending the violent events, government handouts are the only thing keeping this cruel “tradition” alive.

Tens of thousands of people all over Europe have contacted their MEPs in the past few weeks to ask them to vote for the amendment, which was tabled by Dutch MEP Bas Eickhout. Thank you so much to everyone who took action. Your messages clearly had an impact.

PETA France was also outside the Parliament this morning, giving MEPs some last-minute encouragement to do the right thing before the vote:

When a similar amendment was voted on in the Parliament just last year, it was rejected. It just goes to show how quickly we’re making progress in our campaign against cruel “sports”.

So what happens next? Before the amendment becomes law – and the subsidies finally stop – it needs to be approved by EU finance ministers. We’ll keep you posted on upcoming developments and how you can help. But rest assured that today’s news represents a huge step forward in the campaign to end barbaric bullfighting for good.

Write to the UK Chancellor, George Osborne about voting to stop the subsidies at the EU finance meeting: 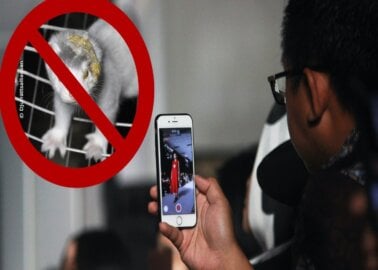