Why Vegan Fashion Is Always the More Sustainable Option

We’re in the midst of a fashion revolution. People are increasingly concerned with how their clothes are made, and the market is responding. More designers and retailers are putting policies in place to eliminate cruelly produced fur, mohair, angora, wool, down, leather, and silk from garments, preventing millions of animals from suffering and being barbarically slaughtered. Now, two questions arise: what will the clothes of the future be made of, and what impact will they have on the environment?

Beyond Skin (http://www.beyond-skin.com/) has a wide range of beautiful women’s shoes, from stilettos to sandals

While animal abuse is the major reason brands are ditching animal-derived materials, many companies are also taking their environmental impact into consideration.

The resources required to confine, raise, and kill animals before processing their body parts into fashion objects are enormous. The Sustainable Apparel Coalition has looked at the environmental, social, and labour impact of various materials across their supply chains and devised a ranking system called the Higg Material Sustainability Index. Basically, the higher the score, the worse the material is for the environment.

As you can see, animal skins are the most devastating.

Likewise, the groundbreaking “Pulse of the Fashion Industry” report released last year found that three of the four most environmentally damaging materials are derived from animals –leather is the worst offender, followed by silk, conventionally grown cotton, and wool.

Since leather and wool are lucrative co-products of the unsustainable meat industry, this is hardly surprising. Raising and killing animals for their flesh and skins not only wastes precious resources, such as water, but also is the leading cause of rainforest destruction.

Animals like cows and sheep create extraordinary amounts of gas, and according to the UN Food and Agriculture Organization, animal agriculture is responsible for 14 to 18 per cent of global greenhouse-gas emissions. Then there’s the waste created by the animals, which may be left to decompose in huge lagoons or be sprayed over crop fields, resulting in run-off that contaminates nearby soil and waterways. Here in the UK, environmentalists are highlighting the negative impact of sheep farming on the land.

Now, factor in the toxic chemicals needed to keep animal-derived materials from decaying. PETA Germany investigated the billion-dollar leather industry in Bangladesh, where it was documented that tannery workers, including children, perform hazardous tasks such as soaking hides in chemicals. Unprotected, they stand barefoot in cancer-causing chemicals and use acids that can cause chronic skin conditions. An estimated 90 per cent will die before the age of 50.

By contrast, the “Pulse of the Fashion Industry” report found that polyurethane (PU) leather has less than half the impact on the environment that animal-derived leather does, and a similar comparison can be made between polyester and wool. Just let that sink in for a second: animal-derived leather and wool are twice as harmful to the environment as PU and polyester, which are plastics! Fossil fuels, which are typically used for making plastics, are used throughout leather production – from growing the crops necessary to feed cattle to tanning and finishing the skins. A typical steer (a castrated bull) is, in effect, a “fossil-fuel machine“, as 1,075 litres of oil are required to grow the corn or other grain he’ll eat throughout his lifetime in order to produce just one hide. And since the bulk of the environmental impact associated with leather production – a whopping 93 per cent, according to the luxury-fashion conglomerate Kering’s “Environmental Profit and Loss” report – occurs before the skins are sent to tanneries, touting “green” processing methods, such as those used to create vegetable-tanned and chrome-free leather, is really just more greenwashing.

As with the production of other animal-derived materials, wool production gobbles up precious resources. Land has been cleared and trees have been cut down to make room for grazing sheep, which has led to increased soil salinity, erosion, and decreased biodiversity. In the first half of the 20th century, Patagonia, Argentina, was second to Australia in wool production. But the scale of local sheep farmers’ operations outgrew the ability of the land to sustain them. Soil deterioration in the region triggered a desertification process that, according to National Geographic, “brought the industry to its knees“.

Cashmere also has a large global footprint. Goats have voracious appetites and will eat a plant’s roots along with the rest of the plant, killing it. As the number of goats used for cashmere has soared across Mongolia – they now make up 60 per cent of the country’s livestock – so has the number of overgrazed areas, and once-green pastures have been swallowed up by sand. Dust storms unleashed by this overgrazing have sent plumes of pollution as far away as North America.

The environmental footprint of superior feather-free fillers – natural or synthetic – is minor when compared to the devastation caused by factory-farming ducks and geese, whose feathers are commonly live-plucked. Down is also a lucrative co-product of the cruel foie gras industry, and the chemicals used to clean the feathers are highly toxic and carcinogenic.

In addition to the dangers posed to the environment by the chemicals used to stop animal fibres from decomposing, the impact these have when they come into contact with the skin is causing increasing concern. A German study found large quantities of carcinogenic substances in the fur trims of well-known brands of children’s jackets. Formaldehyde – a carcinogen – and ethoxylates, which are known to disrupt hormone production, were at levels well above those deemed safe.

Microfibres are the tiny plastic strands that garments shed when they’re washed, which make their way into the sewage system and eventually into our rivers and oceans. At present, there’s no conclusive evidence as to how they’ll affect marine life, but polluting the ocean with plastic obviously isn’t a great idea.

Luckily, there are some very easy ways to prevent this process with your own laundry. Wash bags, such as the Guppyfriend, are designed to catch these invisible strands, or you can even fit a filter to your washing machine. You can also switch to washing your clothes with cold water, since higher temperatures cause a greater reaction with the fabric. Some items – like your luxe faux-fur coat – shouldn’t be washed that often anyway.

And remember: discarded fishing nets account for at least 46 per cent of the plastic in the Pacific Ocean “garbage patch”, and it’s estimated that of the 550 ocean “dead zones” around the world, the majority are caused by run-off from livestock farming. In other words, if we want to protect our oceans, ending our support of animal agriculture is the best place to start.

In addition to causing environmental devastation, all animal-derived materials have limitations. Down feathers, for example, don’t insulate when they become wet, while animal leathers are prone to crack. In contrast, vegan fashion is all about innovation, and textile manufacturers are rising to the challenge by creating a huge array of eco-friendly fabrics from organic matter. You can buy handbags, shoes, wallets, and watches made out of cork, grape skins, mushrooms, or pineapple leaves. More designers are incorporating weaves made from hemp and bamboo that grow without the use of pesticides or chemical fertilisers and are completely biodegradable. And soya-based fabric, also known as “vegetable cashmere”, is made from a by-product of soya-bean processing.

In addition, scientists are working on ways for us to upcycle our rubbish into new garments. Recycled polyester, or rPET, is made from old plastic bottles, and Stella McCartney creates her vegetarian leather from recycled polyester, which “creates 24 times less of an environmental impact, as calculated through the Environmental Profit and Loss”. Meanwhile, a group of innovative design students won the 2018 Biodesign Challenge for their animal-free wool made from hemp and coconut fibres treated with enzymes extracted from oyster mushrooms.

What You Can Do to Protect the Environment 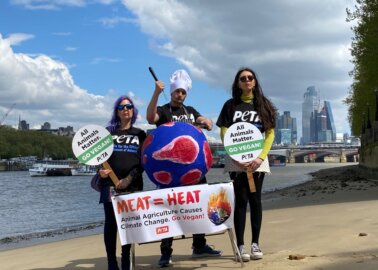