From London to Paris, Berlin, and Milan, supporters of PETA and our affiliates held protests today outside American Vintage stores. We’re demanding that the brand take a stand against the violent mistreatment of rabbits and stop selling angora.

The activists held signs with an image of a rabbit being violently plucked, accompanied by the messages “American Vintage: Drop Angora” and “This Is the Face of Angora”. 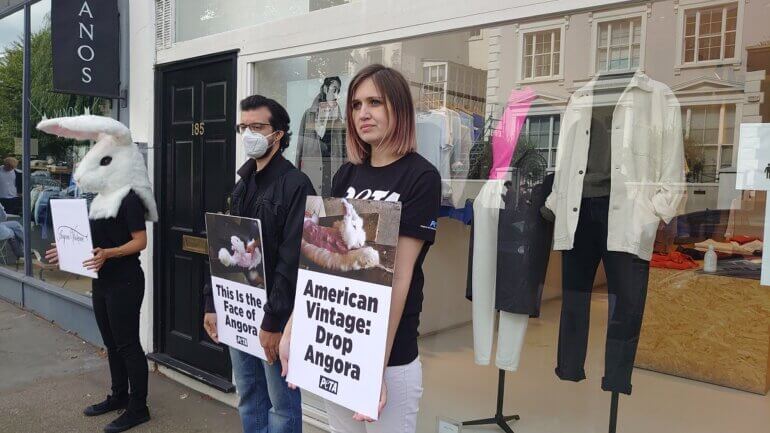 To date, over 320,000 supporters of PETA and our international affiliates have contacted American Vintage to urge the company to join the more than 400 brands – including Burberry, Paul Smith, Ted Baker, Diane von Furstenberg, and Calvin Klein – that have banned angora after seeing PETA exposés.

PETA’s exposé of angora farms in China – the world’s leading producer of the material – revealed that workers yanked out terrified rabbits’ fur by the fistful and that some animals screamed in pain and fear.

They endure this process repeatedly for two to three years before ultimately being killed.

On Chinese farms visited by PETA US – facilities supplying angora to companies that claim that third-party audits have deemed their sources “humane” – rabbits spend their lives isolated in filthy cages. They’re let out only to be violently plucked and, ultimately, slaughtered.

French animal rights organisation One Voice revealed that on angora farms in France, rabbits were tied to tables while their fur was torn out. Workers also twisted and pulled the animals into unnatural positions in order to pluck the hair from all over their bodies, including their genitals.

How to Help Rabbits

PETA France has informed American Vintage about the cruelty inherent in angora production, but the company has yet to take any steps towards banning the material.

Please call on the brand to ban the use of angora in future collections: