To call for an end to the exploitation of animals in the fur industry, PETA supporters rallied outside Canada Goose and House of Fraser in central London for Fur-Free Friday. 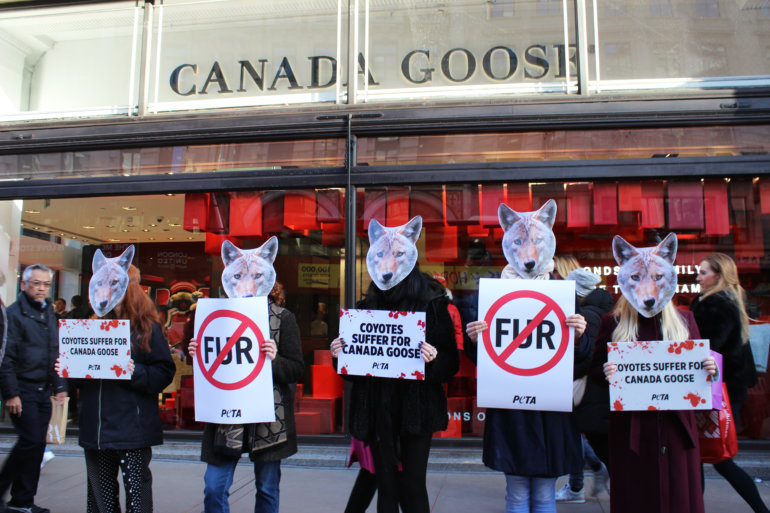 Afterwards, they headed to House of Fraser and joined forces with other animal protection groups to call on the department-store chain to reinstate its no-fur policy after the news broke last week that it had reneged on its longstanding fur-free policy by selling fur stolen from rabbits and raccoons.

While fur-trimmed coats were quickly removed from the retailer’s website and high-street stores – presumably in response to the public outrage caused by the sale of these items – House of Fraser has yet to confirm it has reinstated its no-fur policy.

From coyotes to rabbits, over 100 million animals are killed for their fur every year.  On fur farms, animals are confined to cramped wire cages, denied the opportunity to do anything that’s natural and important to them, and killed by electrocution, neck-breaking, or drowning.

Animals are also caught in steel traps in their natural habitats and left to languish – sometimes for days – before succumbing to dehydration, starvation, disease, or attacks by predators or being bludgeoned to death by returning trappers.

It’s clear that fur is headed for the history books, as the majority of today’s fashion designers – including Prada, Jean Paul Gaultier, Gucci, Armani, Versace, Burberry, Chanel, and Stella McCartney – as well as outdoor clothing brands like Napapijri and The North Face have policies against using it in their collections. And even the Queen has gone fur-free!

High-end fashion events such as Oslo Fashion Week, Amsterdam Fashion Week, and Melbourne Fashion Week have banned fur from their catwalks, while faux-fur manufacturer ECOPEL has announced plans to produce a new faux fur made from recycled plastic bottles to alleviate both animal suffering and the plastic-pollution crisis.

Many countries – including the UK, Austria, and Serbia – have banned fur farming.

People around the world understand that fur is dead, so why are Canada Goose and House of Fraser still trying to profit off of this hellish industry? It’s time they got with the programme and stopped funding this cruelty.

Urge both retailers to stop selling fur, and take more actions to help end the killing of animals for fashion: