Love Is in the Air: ‘Love Island’ Stars Call for a Fur Ban Outside Parliament

The three compassionate Love Island stars also wore tops emblazoned with “Fur – Out! Love – In!”, reminding Parliament and passers-by that ditching fur is the kind thing to do for animals – because all fur comes from animals who suffer greatly.

“Like PETA, I think that killing animals for their fur is totally unjustifiable and unfair,” says Samira Mighty. “With so many amazing, warm and stylish cruelty-free options out there, there’s just no need to buy fur from a fox, a rabbit, a coyote, or any other animal!” 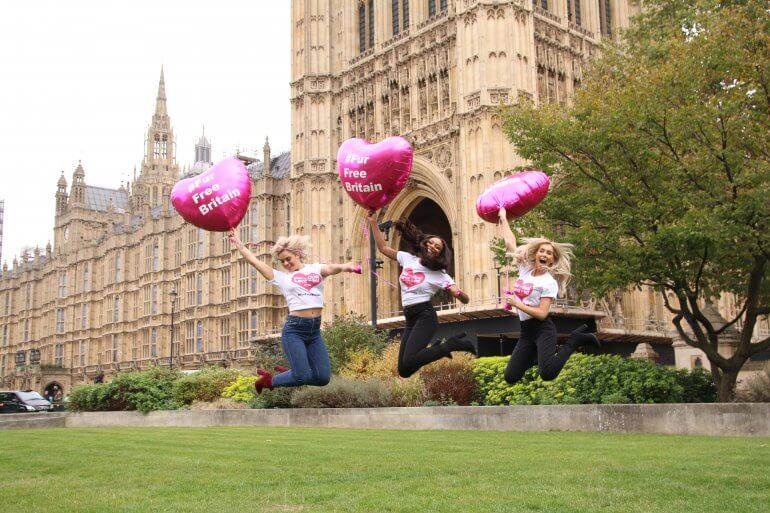 The vast majority of British people – including Samira, Laura, and Laura – don’t support the cruel fur industry. While fur farming was banned in the UK in 2000, Britain continues to import and sell animal fur from countries such as China.

More than 85 per cent of the fur sold today comes from facilities where minks, foxes and other animals are locked up for their entire lives before being killed for their skins. Living in these conditions – far from their natural environment and with no opportunity to play, find food, jump, or run – often drives these inquisitive, intelligent animals insane during their short lives. Fighting, self-mutilation, and cannibalism are common on fur farms.

Most consumers know that there’s no kind way to kill animals for their fur, and the best way for the UK to help stop the violence is by banning fur imports.

A petition signed by more than 100,000 members of the public triggered a parliamentary debate in June, during which MPs from across the political spectrum spoke out in favour of making Britain a fur-free zone. PETA, together with other animal-protection groups, is now urging the government to follow through with meaningful steps towards a ban on animal-fur imports.

Meanwhile, top British designers – including Vivienne Westwood, Molly Goddard, Stella McCartney, and most recently, Burberry – all have policies against using pelts in their designs, and this year’s London Fashion Week was 100 per cent fur-free.

The campaign is calling on the government to make the UK a fur-free zone by extending the existing bans on importing cat, dog, and seal fur to all fur-bearing species. Please join us in calling for a #FurFreeBritain:

Is Your Wool Jumper Worth This?