In the historic city of Oxford, you will find Oxford Stadium – a large venue with capacity to host many forms of entertainment events. Those events should never involve animals.

Today, as Oxford City Council debates a motion to oppose plans to reintroduce greyhound racing at Oxford Stadium and to look into alternative uses for the facility, like a velodrome, PETA joined forces with the League Against Cruel Sports, Oxford Vegan Action, and supportive councillors to urge the city council to back the motion and reject animal abuse.

Dog-racing stadiums have been closing down across the country – a clear sign that the UK public is no longer interested in watching dogs being exploited for this outdated and cruel pastime.

Many former greyhound-racing stadiums have been redeveloped into sites that host car racing, football, or other sports that involve only willing human participants. Will Oxford City Council do the same?

The Cruelty Behind the ‘Sport’

Many puppies bred for greyhound racing are killed in the name of selective breeding and never even reach the racetrack. According to the group then called the Associate Parliamentary Group for Animal Welfare, as many as 12,000 pups may be killed every year.

Those who do qualify to be raced are typically kept muzzled in cages – where they’ll spend 95% of their lives – after just a few minutes on the track. Once their racing days are over, many are abandoned or killed.

A recent report released by the Greyhound Board of Great Britain revealed that more than 400 greyhounds used for racing died or were euthanised in 2020, despite COVID-19 restrictions that drastically reduced the number of fixtures. Gaps in official records also suggest that thousands of dogs “disappear” every year – these animals are presumed dead.

Speaking out on the issue, PETA friend Miriam Margolyes issued the following statement:

I have many fond memories of growing up in Oxford, but they don’t involve watching gentle and sociable greyhounds run around a track for punters. This isn’t sport – it’s animal abuse. I was disgusted to learn from my friends at PETA that dogs used for racing are often doped and many of them die from the injuries they sustain. Greyhound racing is a nasty business that has no place at Oxford Stadium – or anywhere in the UK – except as a distant memory. I hope anyone who loves dogs as much as I do will join me in urging Oxford City Council to leave dog racing in the past by encouraging the stadium to host sports that humans choose to take part in.

To date, more than 26,000 concerned residents and PETA supporters have urged Oxford City Council to oppose the return of greyhound racing.

We hope the stadium will instead host sports involving willing human participants. British Cycling has assessed the facility and approved its suitability for development into a velodrome, for example – something that willing participants, including future Oxford Olympians, could enjoy.

Join us in urging Oxford City Council to support revitalising the community without condemning dogs to misery:

PETA had a ‘Dead Dog’ delivery for the Formula 1 CEO. But why? 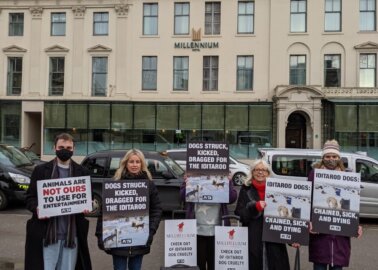