London’s Billingsgate Fish Market is a gruesome sight, filled with dead animals snatched from their ocean homes so that humans can eat their flesh. Many were taken from the sea and forced to endure a gruesome death by suffocation aboard huge fishing boats. Others were still conscious on the gruelling journey to the market – only to be gutted or boiled alive at their final destination.

A photographer visited the market and found live lobsters tied up and scattered across the floor. Live crabs were stacked on top of one another as though they were bricks rather than sentient beings. Fish were packed on ice, some still alive with their mouths open, gasping for breath, and others dead and mutilated – a telling insight into the utter disregard the fishing industry has for these animals:

Billingsgate is the UK’s largest inland fish market. It has been operating for centuries and was the largest fish market in the entire world in the 19th century. It’s difficult to imagine how many millions of lives have been stolen from animals whose flesh has been sold there. Each one was an individual with a unique personality and the capacity to experience pain and fear. None met their death willingly.

If these animals could scream, this might just be the loudest place in London. 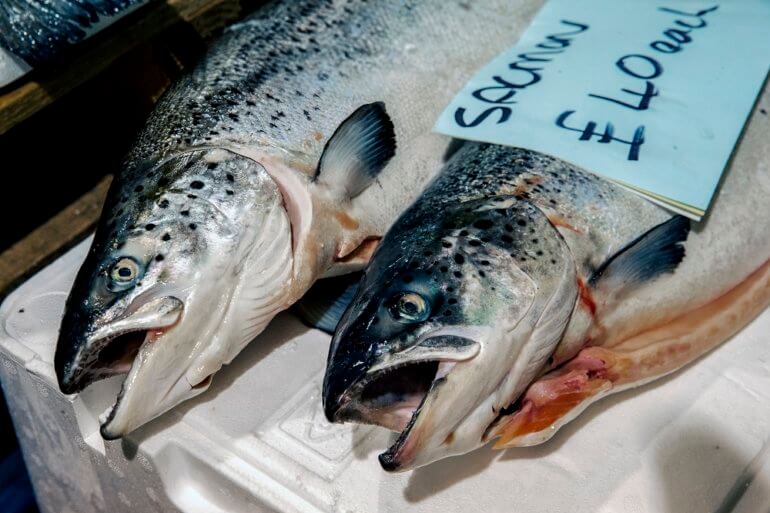 For decades upon decades, humans have been ruthlessly – needlessly – slaughtering sea animals. The killing will continue as long as diners keep paying for it.

By leaving fish and other sea animals off our plates, we can spare countless lives and take a stand against an environmentally destructive global industry that harms millions of sentient beings every day.

To take action to protect sea animals, order our free vegan starter kit, which is packed full of recipes, tips, and advice, including information on plant-based nutrition and ideas for quick and tasty vegan meals. You can also check out our guide to the vegan fish products available in the UK that will give you that “fishy” taste without harming any animals. Win-win!