Diva extraordinaire Gemma Collins, aka “The GC”, is showing her serious side in a new PETA campaign that takes marine abusement parks to task. She highlights that sensitive marine animals are trapped in concrete tanks that are, to them, the size of a bathtub, while being separated from their families and forced to perform tricks for humans. The animals long for freedom, and their isolation leads to extreme stress, loneliness, frustration, and depression.

In an accompanying video spot, the reality TV star explains why denying animals everything that’s natural and important to them can cause them to lash out:

“When people say, ‘Oh, my God, why has this whale killed one of our trainers?’ it’s because [the] animal … was taken from [their] mother in the wild, all to live their life in a bathtub. This isn’t acceptable. People are making money off of parading these animals.”

Gemma is part of a long list of celebrities – including Amanda Holden, Sharon Osbourne, Noah Cyrus, Charlotte Crosby, Paul O’Grady, the late Sir Roger Moore, and many others – who have teamed up with PETA and our international affiliates to speak out against marine-mammal captivity.

In nature, orcas and bottlenose dolphins can swim up to 140 miles and 60 miles per day, respectively. They can dive to depths of more than 300 metres below the ocean’s surface, and they maintain dynamic relationships within large social networks.

At SeaWorld’s parks, 140 dolphins are squeezed into just seven small tanks and can’t escape attacks from other frustrated, aggressive members of their species.

A recent expert report compiled by PETA US revealed that many dolphins at SeaWorld have open wounds and extensive scarring – yet trainers still rode on their backs and stood on their faces during sea-circus performances until a recent PETA US campaign persuaded the company to end this egregious practice.

Collins asks people to help her advocate for the release of all animals from marine parks:

“Let’s campaign to get all the marine life into a sanctuary, where they can have some actual enjoyment in their lifetime.”

TUI is still selling tickets to SeaWorld’s watery prisons. If you haven’t already done so, please urge it to stop profiting from orcas’ misery:

Send a Message to TUI

If you want to receive tips on getting active for animals, including our “Step-by-Step Guide to Being an Animal Activist Online”, please join our Action Team today: 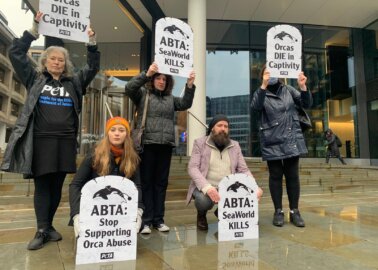