Ireland Ends Fur Farming: Which Country Will Be Next?

Update: 1 April 2022
Good news for minks: the bill to ban fur farming in Ireland passed the final stage of debate in the Seanad on 29 March. To become law, it must now be signed by the president of Ireland, Michael Higgins. He should do so in the next few weeks.

This means an end to cruel fur farms in Ireland. The last three farms operating in the country will automatically have their licences revoked when the bill becomes law, as this legislation prohibits the breeding, rearing, or keeping of animals solely for the sale or manufacture of products from their skin or fur.

Thank you to the more than 66,000 of you who took action to make this happen! You asked, and they listened and passed legislation to spare thousands of animals horrific suffering every year on these farms.

We’re breaking open the Guinness at PETA! According to reports, no more minks will suffer or be killed on Irish fur farms.

Ireland is the latest country to start shutting down cruel fur farms. Back in 2019, the government announced that it would phase out fur farming by prohibiting the establishment of new fur farms and setting out plans to wind down existing facilities. Now, following an outbreak of a potentially vaccine-resistant mutated strain of the novel coronavirus on Danish fur farms, the Department of Health has strongly advised that over 100,000 minks on Ireland’s fur farms be killed, effectively bringing forward the ban. Fur farms are packed with sick, stressed animals and have been identified as COVID-19 hotspots.

PETA and other animal protection groups have long campaigned against the misery of the fur industry.

In 2019, over 66,000 PETA supporters sent a letter to Michael Creed, then Ireland’s minister for agriculture, urging him to take action to spare the lives of the approximately 200,000 minks who are exploited every year in the country’s fur trade. In addition, hundreds of Irish residents wrote to their local TDs, asking them to support the bill to ban fur farming.

We’ve held bold demonstrations in Ireland, outside the Dáil and in Dublin city centre. Fur coats donated to PETA by those who have had a change of heart were transformed into street art to remind people of the individual animal behind every fur item. 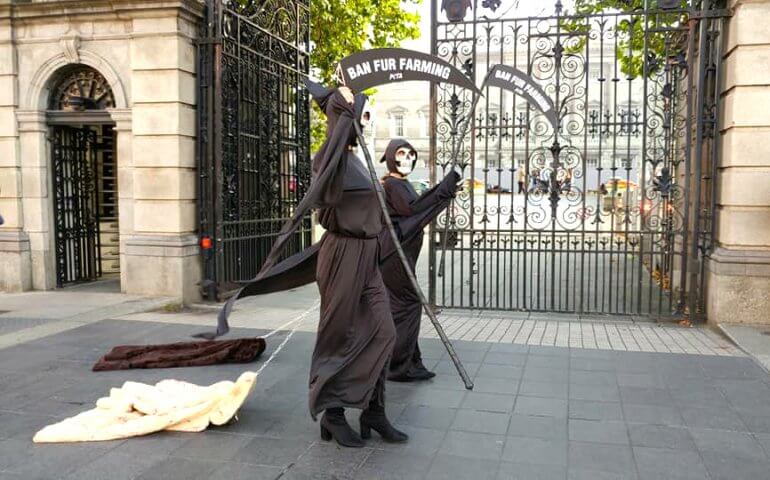 Well-loved celebrities like Cillian Murphy, Imelda May, Anjelica Huston, Pamela Anderson, and Morrissey fired off letters to the Irish government. Irish model and actor Tiffany Stanley bared all to highlight the issue, as did model Suzanne McCabe. Singer Brian McFadden also starred in a poster campaign back in 2015 that drew much media attention to the issue.

The ban reflects the will of Irish people and means the country will no longer lag behind nations that have already banned or are phasing out fur farming, including the UK, Austria, Croatia, and Serbia.

Fur fell out of fashion long ago, when people learned what minks and other animals go through before they’re turned into coats or accessories. On fur farms, they typically spend their entire lives confined to cramped, filthy cages. They have no opportunity to engage in natural behaviour. The stress of this extreme confinement often drives them insane – fighting, self-mutilation, and cannibalism are common. In the end, they face a horrific death, often by gassing, electrocution, or poisoning. Sometimes, they’re even skinned alive.

What’s Next in the Movement Against Fur?

It’s time for other countries to follow Ireland’s lead and ban fur farming. Tell Denmark, Italy, and Sweden to act now! Until they do, fur farms will continue to pose a threat to public health and will remain a living nightmare for animals.

No More Excuses: Faux Fur Is Proven to Outperform Bearskin